A family tree: Where are Andres Bonifacio’s descendants?

MANILA, Philippines – Andres Bonifacio, regarded as the father of the Philippine Revolution, lost his infant-son in 1896 – the same year when the first battle of the Kataastaasan Kagalanggalang na Katipunan (KKK) ng mga Anak ng Bayan or the Katipunan was fought.

His son’s death left the Katipunan leader with no direct descendants.

It was not until 1992 when the descendants of Procopio and Espiridiona – both siblings of Andres – met each other. Before that, even Espiridiona herself did not know about Procopio’s son.

The late historian Isagani Medina found out about the remaining descendants of Procopio in his history class at the University of the Philippines Diliman, when a student named Gregorio “Gary” Bonifacio wrote about his family’s lineage as part of the course requirements.

Stories passed down from one generation of Bonifacios to another continue, following the reunion of the two fragmented clans set by the Manila City Government more than a decade ago. Espiridiona “Nonay” Bonifacio was hidden by the Magdiwang group (faction versus Magdalo) of the Katipunan right after Bonifacio’s execution in Maragondon, Cavite. She was brought to Ternate, a neighboring town in the same province.

Nonay was kept by Genoveva Distrito in their home, where some 4th generation Bonifacios still live to this day.

Genoveva was married to a Manila storeowner who sold shoes. When Genoveva migrated to Manila, she took Nonay with her. It was in the shoe store where Nonay met Emiliano, Genoveva’s brother, who she eventually married.

They migrated back to Cavite and had 6 kids. Emiliano died as a civilian during the Japanese war.

Long after Emiliano’s death, Nonay Bonifacio-Distrito migrated to Manila with her children already grown up. The properties the family acquired throughout the years were divided among the 6 siblings.

Nonay’s children and grandchildren live in Cavite and in different parts of Manila.

READ: The agony of Lola Nonay, the Supremo’s sister

The story of Procopio’s descendants

While Procopio died with Andres in the mountains of Maragondon, he had a son with Juana from Mindoro, with whom he had an affair, most likely during his stay in the province as one of the founders of the secret society in Occidental Mindoro.

Juan Bonifacio, Procopio’s son, fled back to Mindoro with his mother after his father’s execution. He grew up there and married Eleotera, with whom he had two sons.

The family was middle-class, with parcels of land in Occidental Mindoro now divided among the remaining descendants.

For a time, none of the family members had traveled beyond the island.

Most of the remaining descendants are still based in Mindoro, while Gregorio’s children and grandchildren are in other parts of Luzon.

A family tree tracing the lineage of both Procopio’s and Espiridiona’s decendants is shown below. Hover your mouse over some of the names to know more about them. 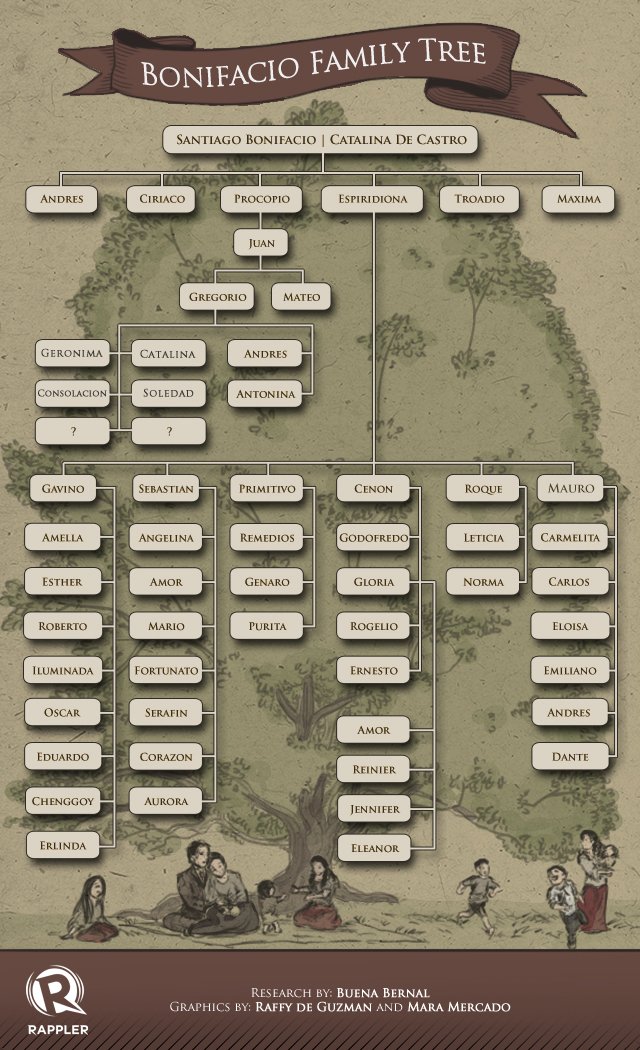