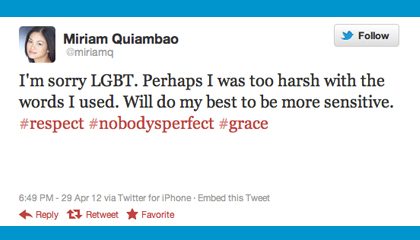 Former beauty queen Miriam Quiambao apologized to the lesbian, gay, bisexual and transgender (LGBT) community online for remarks which drew on her religious beliefs and the Bible characterizing gay people as “mistakes.”  It started with a guest spot on television Saturday night when this exchange happened about a gay man on the panel.  Quiambao: “God made us all for a purpose. And I don’t understand why God made him (Benedito) that way. I feel, though, that in my knowledge of God, God never makes mistakes and He’s not a liar. So however He made him, that’s who he really is.However, because God has allowed this to happen in his life, perhaps there is a purpose. And at the end of the day, he will be the one to face God… we’re not in a position to judge because we’re all sinners, we’ve all fallen, and I feel that God will be the one to judge him in the end.  I’m just hoping that whatever purpose God put him there, he’ll be able to stand face to face with God in peace.”  Panelist:  “Can you just enlighten me, Miriam, when you said that – is Bemz (referring to gay panelist) a mistake?” Quiambao: “God is sovereign.  And I’m not saying that I am right or wrong in what I am saying, but I’m basing my beliefs on what is said in the Bible.”  The conversation continued on Twitter over the weekend, with reactions from secularist group Filipino Freethinkers (@ffreethinkers) and Broadway star Lea Salonga.