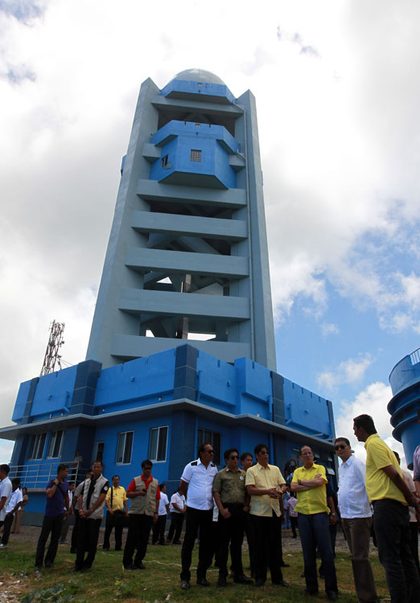 MANILA, Philippines – The first of 3 new Doppler radar stations of the Philippine Atmospheric, Geophysical and Astronomical Services Administration (PAGASA) was inaugurated in Catanduanes on Wednesday, May 2, promising more accurate weather forecasts in the future.

President Benigno Aquino III led the inauguration of the radar station, designated as the Virac radar station despite being located at the neighboring town of Bato, built with the assistance of the government of Japan.

The new facility is on top of a hill, built through a P1.2-B grant from the Japan International Cooperation Agency.

“Our people’s lives and livelihoods are at stake here, and it is the government’s responsibility to do everything in its power to be ready for these natural disasters,” Aquino told the crowd assembled at the inauguration of the new facility.

“We must continue focusing more of our resources into creating a system that will better warn us, and our people, about possible typhoons. Today, this is exactly what is happening in Catanduanes,” he added.

The new facility is seen to enhance the capability of the state weather bureau to monitor weather, especially tropical cyclones, with better monitoring of rainfall, wind speed, and other data.

It is also the “most vital and strategic” weather installation in the country, Science & Technology Secretary Mario Montejo said, since it faces the Pacific Ocean and covers the entire Bicol region (Region V) and parts of Eastern Visayas (Region VIII) – two areas that are the first to bear the brunt of most typhoons. 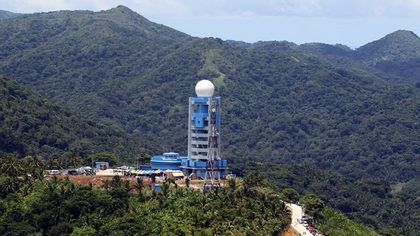 It will also be operating 24 hours a day, rain or shine, up from two hours a day during good weather (the old radar ran 24 hours only during typhoon monitoring).

The new radar facility can also transmit information real-time for faster, more regular, and more precise forecasts – which the weather bureau has been trying to improve after getting flak for inaccurate and slow forecast announcements in the past.

“This will give us more information and will help us predict more accurately the direction, the impact, and the intensity of weather disturbances approaching our country. This means that we’ll be better prepared—that fewer Filipinos will be victimized by the vagaries of weather,” Aquino added.

However, the lack of manpower and communications equipment, as well as the power supply problem in the island province, could hinder the full utilization of the Doppler radar facility, as reported by the Catanduanes Tribune.

The two other new Doppler radars will be installed in Aparri, Cagayan, and Guiuan, Eastern Samar.

Aquino also inaugurated two hydroelectric power plants in the province, which is seen to address the island’s power supply problem.

The Solong and Hitoma-1 mini-hydroelectric power plants are the first to be developed by private entities under the special power utilities group (specifically, small island grids not connected to the major power grids) of the National Power Corp. – Rappler.com