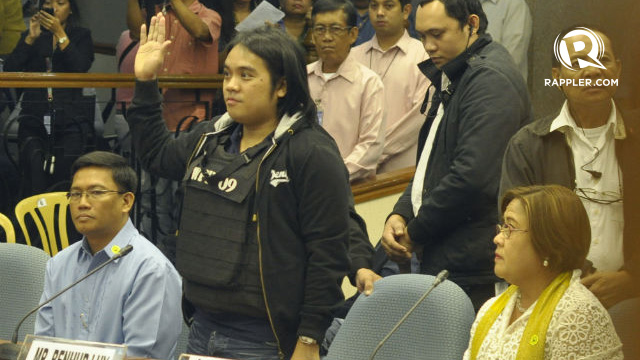 (The truth is the confirmation letter they are branding that Senator Bong supposedly signed is also fake. His signature there is also a forgery. That letter to COA is also fake. That’s part of the documents that Benhur Luy and company faked.)

(The operation of Benhur Luy and company is really sophisticated, it’s really a syndicate.)

Bodegon was referring to a letter Revilla sent to COA on July 20, 2011 stating that the signatures in pork barrel documents belonged to him and his staff, lawyer Richard Cambe. The National Bureau of Investigation (NBI) cited this confirmation letter in its plunder complaint against Revilla over the scam filed before the Ombudsman.

Incidentally, Bodegon was a defense counsel for Corona during the impeachment trial.

Bodegon said that Revilla’s camp has long been asking COA for a copy of the supposed confirmation letter and it took some time before the agency furnished the senator a copy.

In his speech, Revilla cited Luy’s admission in a Senate hearing that he and other Napoles employees faked lawmakers’ signatures upon Napoles’ instruction.

Bodegon said that because Luy and the whistleblowers faked the letter and other PDAF documents, Revilla’s camp filed a counter-charge of plunder against them before the Ombudsman. This is on top of the initial damage suit Revilla filed against them before a Cavite court last year.

In October 2013, Revilla filed a damage suit against the whistleblowers, asking a Cavite court to declare the PDAF documents void. The senator also demanded that the whistleblowers return P502 million of his pork barrel channeled to Napoles NGOs.

Bodegon reiterated Revilla’s assertion that the whistleblowers lied because they were wrong in calling Cambe his chief of staff or chief political officer.

The lawyer said Revilla only “inherited” Cambe as a staff member after the aide worked for his father, former Senator Ramon Revilla Sr.

“It was as if Atty Cambe even had a demotion when he became the staff of Senator Bong,” Bodegon said, reiterating what Cambe told Rappler in an exclusive interview.

(If you entered a business with a classmate of yours, does it mean your parents are also part of your business?)

Bodegon sought to distance Revilla from Napoles after the release of photos showing them together in parties.

(It’s not correct to say that just because your children know each other, the parents are also acquainted. That’s non sequitur. You are trying to connect two things that have no connection.) – Rappler.com