May 6, 2012 5:29 PM PHT
Rappler.com
Facebook Twitter Copy URL
Copied
The moon is approaching the perigee of its orbit around our planet - approximately 356,955 kilometers from Earth; heavenly body will appear bigger, brighter

MANILA, Philippines – You might see a bigger, brighter Moon tonight – but no, nothing extraordinary has happened to our only natural satellite.

The heavenly body will be in its closest point to the Earth this Sunday, May 5, thus, it will be appearing a wee bit larger than normal, especially during moonrise.

In science terms, it is called “perigee moon”: the moon is approaching the perigee of its orbit around our planet – approximately 356,955 kilometers from Earth.

The term “supermoon” was first used in 1979, and the phenomenon happens at an average of once a year. 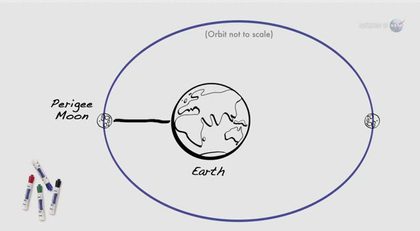 Other countries already saw the supermoon from their vantage point, with many people sharing amazing photos online.

State weather bureau PAGASA, in an interview with radio dzMM, said the Moon will be appearing 14% larger and 30% brighter than normal.

NASA says the best time to look at the moon is when it is over the horizon, when “illusion mixes with reality to produce a truly stunning view.” The best time to observe the supermoon will be around 6:30 pm Philippine time, PAGASA added.

However, the supermoon is expected to overshadow another astronomical phenomenon: the Eta Aquarid meteor shower, which are part of the remnant debris trail of the famous Halley’s Comet.

For this once-a-year phenomenon, Rappler asked netizens to share their photos of the supermoon (and the Eta Aquarid shower, if you happen to see it) by tagging us on Facebook or Twitter (@rapplerdotcom). and using the hashtag #SuperMoonPH on Twitter.

Below are some of the best shots of the Super Moon taken by netizens in various parts of the country.