MANILA, Philippines – Justices of the Supreme Court as well as police and military generals should disclose their assets to the public, said the head of the independent agency overseeing such disclosures.

CSC is constitutionally mandated to ensure all government officials and employees not only make proper declarations through their SALNs but also enable the public – through the media – to scrutinize these.

Duque made this statement as Supreme Court Administrator Midas Marquez announced that the justices would have to meet first to decide whether or not to release the latest SALN of impeached Chief Justice Renato Corona to the impeachment court.

I asked Duque whether or not SALNs should enumerate even the real properties abroad owned by government officials and employees. He replied:

I also asked Duque whether any assets in foreign currencies such as dollars or euros ought to be declared as well in SALNs. Duque replied:

This means that if we follow Duque’s explanations, CJ Corona should have declared in his 2011 SALN which he submitted last April 30 any foreign real estate property and the value of all his foreign currency deposits here and abroad IN PESO TERMS.

Why justices clamped down on disclosures

Duque told me he had recently read why the SC justices had clamped down over 20 years ago on the public disclosure of SALNs of any member of the judiciary branch of government.

He said a certain Jose Alejandrino had asked for the SALNs of all the SC justices. The justices learned that Alejandrino had intended to leak the information to a litigant with a pending court case.

Duque was referring to the following paragraphs of RA 6713 or the public officials’ Code of Conduct and Ethical Standards. RA 6713 is the enabling law that gives life to Article XI, Section 17 of the 1987 Constitution which requires all public servants to fill up SALNs and disclose these to the public “in the manner provided by law”.

RA 6713 specifically directs the disclosure of SALNs in the following manner:

(1) Any and all statements filed under this Act, shall be made available for inspection at reasonable hours.

(2) Such statements shall be made available for copying or reproduction after ten (10) working days from the time they are filed as required by law.

(3) Any person requesting a copy of a statement shall be required to pay a reasonable fee to cover the cost of reproduction and mailing of such statement, as well as the cost of certification.

(4) Any statement filed under this Act shall be available to the public for a period of ten (10) years after receipt of the statement. After such period, the statement may be destroyed unless needed in an ongoing investigation.

I asked Duque whether military and police generals were exempted from such yearly SALN disclosure because I cannot recall the SALN of any general being disclosed annually. Duque said such disclosure was also enshrined in Article XI of the 1987 Constitution which states in:

A bit of SALN history

Since the first law on SALNs was enacted in 1960 – or over half a century ago – Filipinos have not paid enough attention to these documents and government officials and employees have been more than happy to bury SALNs within the darkest confines of bureaucracy.

It was the political ambition of a sitting Philippine president which prompted the passage of RA 3019,  requiring public officials to file SALNs for the first time.

Carlos P. Garcia wanted to be the first reelectionist Philippine president. But one year before his term ended, the electorate had become disillusioned because “graft and corruption in high and low places continued to plague society resulting in the loss of revenues to the government,” according to historians Teodoro Agoncillo and Milagros Guerrero in their book, History of the Filipino People.

To neutralize the corruption issue being hurled against him by his own vice-president, Diosdado Macapagal, Garcia backed Congress’ approval of RA 3019.

RA 3019 also introduced an anti-corruption tool – the mandatory yearly filing of a SALN by everyone in government. Again, though, this law was sloppily followed because lawmakers had provided a large loophole in the law. There was no way of counter-checking whether the law was being followed because public disclosure of SALNs was not required.

It would take Congress 26 more years and the bitter experience of a rapacious dictatorial government to close that loophole. After the dictator Ferdinand Marcos fled in 1986 leaving behind a bankrupt treasury, a new Constitution was ratified. It enshrined the filing of SALNs but left it to Congress to pass an enabling law to spell out the manner of public disclosure.

That enabling law was approved two years later in 1989 as RA 6713. This spelled out the manner of disclosure through the media. It gave media unprecedented access to these documents for the first time, but subject to certain conditions. Most importantly, it entitled the media – as the public’s eyes and ears – to disseminate what was written in the SALNs.

Quietly, though, the Supreme Court issued a resolution exempting one entire branch of government or the judiciary from the constitutional and legal requirements of SALN disclosures. How the justices were able to do this is a puzzle.

Perhaps, at that time even media did not realize the full value of SALNs.

In recent weeks, I was inadvertently able to test the SALN disclosure laws when I tried to obtain the SALN of presidential spokesman Edwin Lacierda.

This was after my attention was called by a US-based Fil-Am lawyer regarding the existence of certain California properties purportedly belonging to another senior Philippine government official besides Corona.

Curious as to what else he could turn up, I asked the lawyer – whom I will call Steve – to look up as well any real properties belonging to close aides of President Benigno Aquino III, who are at the forefront of an anti-corruption campaign. For good measure, I also asked Steve to look for any properties owned by Associate Justice Antonio Carpio (CJ Corona’s Supreme Court colleague and school mate), since I had earlier received a tip that some Malacanang Palace aides of President Fidel V. Ramos once bought properties in Florida. It was Carpio who had recruited Corona into the Ramos administration.

I also asked Carandang whether he owned any property in the US. He replied:

Secretary Lacierda was listed as a co-owner in a condo unit in California: 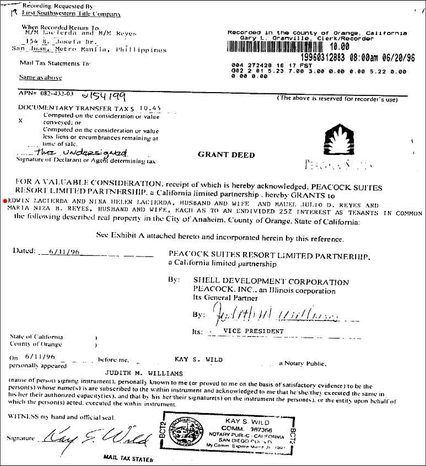 When I asked him whether he and his wife owned it, Secretary Lacierda replied:

I wanted to counter-check what he said. I asked Malou Mangahas about Lacierda’s SALN. She advised me to get my own copy.

I tried to get my own copy of Secretary Lacierda’s SALN.

They were willing, though, for me to send my letter-request via a messenger service.

I had to find an easier way. Glenda Gloria of Rappler-Newsbreak agreed to help and obtain for me a copy of Secretary Lacierda’s SALN from the Malacanang Records Office. In return, I told Glenda she could upload this story onto their website. I would also like to thank Rey Santos Jr. who physically obtained the SALN for Newsbreak-Rappler. No joke, in this heat.

Secretary Lacierda was telling the truth. He did disclose his California property in his 2010 SALN. I have placed a red dot beside the disclosures. See below – However, he listed this under “Personal and Other Properties” and not under “Real Properties”.

I asked CSC Chair Duque about this. He said the problem was that while a form was prescribed for SALN disclosures, people tended not to follow this. He added:

For transparency and easy access, why can’t the Office of the President simply put SALNs of cabinet and other senior officials who submit to them online, I asked Undersecretary Manolo Quezon. This would include military officers from the rank of colonel and naval captain.

What Usec Quezon said surprised me:

Usec Quezon said the Civil Service Commission had issued guidelines on SALN disclosures and these have to be followed. [*NOTE: I have included at the end of this article links pertaining to SALNs that were provided by @Baycas, one of the members of Our Cyber Plaza Miranda, the growing community of Filipinos here and abroad who congregate in this site.Thank you, @Baycas.]

Usec Quezon said that to enable the Office of the President to upload SALNs online,

I asked a University of the Philippines law professor about this. My source, who spoke on condition of anonymity, agreed with Quezon’s view and added that government officials could even impose conditions on how their SALNs would be made public.

I asked Chairman Duque if that was his understanding of the law. He said there was nothing in the law that would prevent Malacanang from posting SALNs online.

Duque disclosed that due to different interpretations on how to fill up SALNs and disclose their contents to the public, he would call a meeting of the various stakeholders soon:

Duque also noted that the new SALN form that he had tried implementing this year was actually derived from RA3019, which was approved way back in 1960. This law states that aside from disclosing assets and liabilities, a SALN filer was required to state “the amounts and sources of his income, the amounts of his personal and family expenses and the amount of income taxes paid for the next preceding calendar year.”

Interestingly, in all the SALNs of top politicians I have seen through the years, I’ve never seen anyone disclose personal and family expenses and income taxes paid.

My first-hand experience in requesting for Secretary Lacierda’s SALN showed me that SALNs are not easy to obtain. Is there a conspiracy to make it difficult for citizens to find out about SALNs?

It also showed me how important SALNs could become as a tool for ferreting out unexplained wealth, if accomplished properly and disclosed publicly and on time.