First Lady of France: From Carla Bruni to Valérie Trierweiler 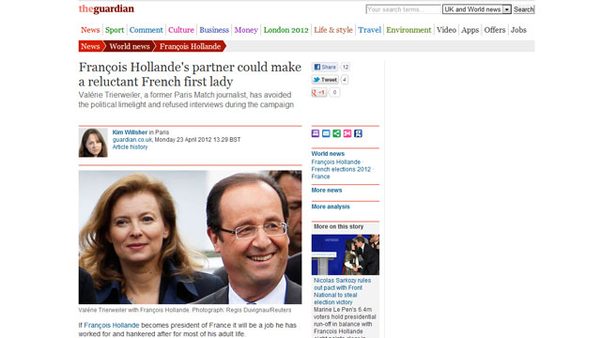 Step back, Carla Bruni. It is Valérie Trierweiler’s turn as First Lady of France. Following the defeat of Nicolas Sarkozy in the recently concluded national elections, Socialist François Hollande takes the reins of a country that’s in a region trying to get up from an economic slump. Trierweiler, a 47-year-old journalist who tweets and twice-divorced mother of 3 teenagers, may likely be fit for the role. Unlike Bruni who is a millionaire heiress and former supermodel turned folksinger, Trierweiler comes from a modest family in eastern France and says she wants to keep on working to support her children since she does not want to be paid for by the state. Trierweiler has, like Hollande, styled herself as the antithesis of “bling” on the campaign trail. The couple are not married and she prefers to be called Hollande’s “companion” than “partner.”