Aquino: This battle is not just about China 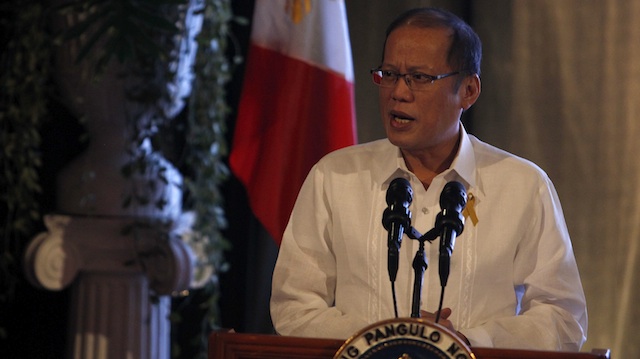 MANILA, Philippines – The issue between the Philippines and China is really simple, President Benigno Aquino III told the New York Times in an interview regarding the escalating maritime disputes between Manila and Beijing.

The issue is not about China or how it is insisting to resolve the maritime disputes through bilateral talks, which Aquino dismissed as “unworkable.” It’s not even about a weak Philippine military that doesn’t stand a chance against China’s.

The core of the matter, Aquino stressed, is that both the Philippines and China are signatories to the United Nations Convention on the Law of the Sea (UNCLOS), which recognizes the 200-nautical mile exclusive economic zone (EEZ) of all countries.

“China’s position is that if you look at the 9-dash-line theory, it seems like the entire South China Sea is theirs. Our position is that it contravenes the agreement that they are a signatory to, like we are, which is the UNCLOS,” Aquino told the New York Times. Malacañang released the transcript of the interview on Saturday, February 8.

Aquino noted that the disputed Scarborough (Panatag) shoal is 120 miles within Philippine’s EEZ and “340 or so miles away” from the closest landmass in China. The rocky sandbar off the coast of Zambales has been practically occupied by Chinese ships since the months-long 2012 standoff where the Philippines withdrew. (READ: 3 Chinese ships, 7 PH fishing vessels spotted in Panatag)

“Hence, we brought the matter up to a tribunal to decide precisely everybody’s rights, duties, and obligations. Now, that is not against China per se, but rather to clearly establish, again, your rights vis-a-vis the rights of others and have that as a milieu where you can deal with each other,” Aquino told the New York Times.

The Philippines is fighting for its right to its EEZ and this battle, Aquino said, is a fight that the Philippines cannot abandon. Despite the Philippine military’s shortcomings, which were greatly detailed in the New York Times‘ popular infographic, “A Game of Shark and Minnow,” it will “endure the hardships that they have to undergo in the interest of protecting our sovereignty and our people.”

The Philippine military is acquiring critical assets not to prepare for war against China but to improve its capability to patrol the disputed waters. The Philippines supports a peaceful resolution of the conflict and thus the case before the UN.

This is where Aquino asked – almost demanded — other countries to support the Philippines because, he said, this battle against China is also a battle for the rights of all the nations of the world to their EEZs against other countries that attempt to claim it.

“All of the countries involved in disputes keep saying that we will adhere to international law. And as far as we are concerned, I think, this is a view held by others in other countries – one of the laws, one of the most fundamental international laws is the United Nations Convention on the Law of the Sea (UNCLOS) – and this was a very difficult agreement to come up with,” Aquino said.

The US used to have bases in the Philippines that allowed the presence of tens of thousands of US troops here. But the Senate voted in 1991 to end their contracts. They were able to return in 1999 following the approval of the Visiting Forces Agreement, which allows the temporary presence of US troops in the country.

Against the backdrop of growing maritime disputes, the Philippines is now asking for the increased presence of US troops here. The two countries are finalizing a deal that will allow increased presence of American troops, give them more access to our military bases, and allow them to construct facilities here. Aquino said the Philippines and the US are close to a deal. (READ: PH, US close to signing military deal)

Bilateral talks will not work. It’s a battle all the nations have to join, he said. “You have their insistence on having a bilateral discussion to address a multilateral problem, which we think is unworkable. How do you get the others to agree to something that they were not even a participant to?”

He warned of the repercussions of allowing China to continue its aggression in the disputed waters.

He added, “Say yes to something we believe is wrong now, what guarantee is there that the wrong will not be further exacerbated down the line?”

Perhaps Aquino should have stopped there. But he proceeds to talk about Sudetenland, now the subject of criticisms. Aquino was sharing a conversation with an unnamed head of state.

“I am an amateur student of history. I remember the Sudetenland crisis in World War 2, and I remember the words of the Czech, I think, Premier that time, One has to ask the question, at what point do you say, ‘Enough is enough,’” Aquino said.

“The world has to say it. Remember that the Sudetenland was given in an attempt to appease Hitler to prevent World War 2 and that didn’t happen,” Aquino added. – Rappler.com