Defense: Corona will bare it all

May 8, 2012 8:18 PM PHT
Facebook Twitter Copy URL
Copied
Chief Justice Renato Corona's lawyers say he will bear all once he takes the witness stand in his own impeachment trial

MANILA, Philippines – Chief Justice Renato Corona is baring it all.

Minutes after dropping a bombshell in the impeachment trial, Corona’s lawyers gave a colorful description of their client’s sudden decision to testify.

Asked if his client will invoke bank secrecy laws on the witness stand, defense counsel Ramon Esguerra told reporters, “Why will he take the stand if he will still invoke the logic? Wala na. Maghuhubaran na tayo.” (No more. We will go naked.)

Esguerra said that Corona’s decision to testify is “very clear.”

“He will testify to the extent that the accusers on this particular issue against him on illegal wealth and unexplained wealth …. That’s just fair. You accuse me then I will answer you.”

Esguerra said his client will account for all his assets.

“It will be the Chief Justice who will explain and therefore answer every accusation and account for every centavo that has been seen in his account.” ‘See what Corona is made of’

Defense counsel Judd Roy, who told the Senate about the decision, told Rappler after the trial that the issue should not be “cluttered.”

“He’s ready to testify period … Don’t cast any doubt. It’s that simple and the Senate President said he will issue the subpoena against the congressmen. We are very happy.”

“It’s a good day and we’re proud that the Philippines is finally going to see exactly what the Chief Justice is made of,” added Roy.

During the trial, Senate President Juan Ponce Enrile said he is happy with Corona’s decision.

He later told reporters, “We are ready to hear the Chief Justice.” 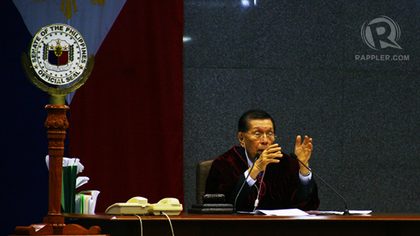 “I’m very happy that finally, the Chief Justice has agreed to appear before the impeachment court.”

Estrada said Corona can rebut allegations that he has US $10 million dollars, as the Office of the Ombudsman asked him to explain.

“We have many questions we want to ask him including if he wants to say something about the alleged $10 million deposit in a certain bank. It will be good for us to know,” he said.

For the prosecution, the team supports the defense’s request to summon Ombudsman Conchita Carpio-Morales but will object to the petition to subpoena the complainants.

Chief Prosecutor Niel Tupas Jr echoed Enrile’s statement that the defense should consider cutting down the list of new witnesses it wants to subpoena.

In an interview after the trial, Tupas said there is no longer any need to summon the likes of former Akbayan Rep Risa Hontiveros-Baraquel. Pimentel told the impeachment court he is changing his vote. The senator said with the delay in the Supreme Court decision on the issue, he is now in favor of opening Corona’s dollar accounts.

With Pimentel’s statement, the Senate vote is now 12-11 to obey the Supreme Court TRO.

Tupas said, “Senator Pimentel’s vote changed. The Senate should pursue that in caucus and revisit the decision.”

The Senate will hold a caucus on Monday, May 14, to discuss the new developments in the trial, and adjust the timetable of the hearings.

The impeachment trial will go on a 48-hour break starting Wednesday, May 9, to allow the defense to file the request to subpoena Morales, and the complainants, and for the Senate to issue the subpoenas.

The trial will resume on Monday, May 14. – Rappler.com