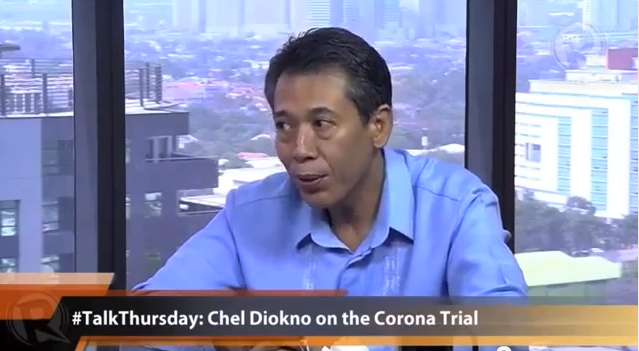 Legal suicide. This is lawyer Jose Manuel Diokno’s take on the defense’s decision to have Ombudsman Conchita Carpio-Morales testify on his alleged multi-million-dollar deposits. At the same time, it could be a “ploy” to obtain information that will allow the defense to seek another Temporary Restraining Order from the High Tribunal. Guesting on Rappler’s #TalkThursday on May 10, the dean of the De La Salle College of Law said the defense is taking a huge risk in presenting hostile witnesses whom they could not control. “The prosecution could have a field day,” Diokno said. Carpio-Morales has been subpoenaed to testify on Monday, May 14. Other witnesses who have been subpoenaed include former Akbayan partylist Rep Risa Hontiveros, Akbayan Rep Walden Bello, Harvey Keh of the Kaya Natin Movement and Emmanuel Santos. They filed separate complaints against Corona with the Office of the Ombudsman for alleged unexplained wealth.