‘Declare SC has no jurisdiction over RH challenge’ 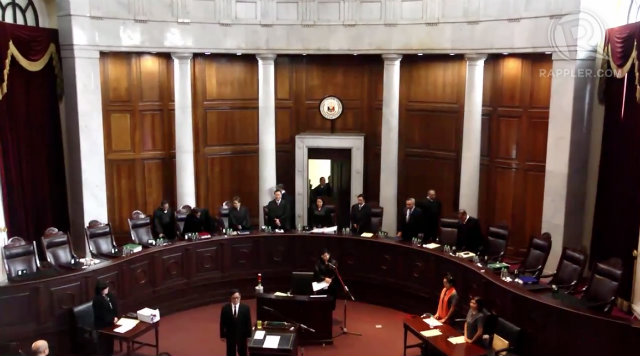 MANILA, Philippines – The Supreme Court verdict on the Reproductive Health (RH) law is expected in April, and the law’s advocates are hopeful the justices will rule in their favor – albeit not unanimously.

For Alfredo Tadiar, however, it’s not a question of whether the law – halted since March 2013 – is constitutional or unconstitutional, but whether the High Court should be doing a judicial review of it at all.

“I propose an in-between position: to declare that SC has no jurisdiction over RH challenge,” Tadiar said during a forum Wednesday, March 5.

Tadiar, recognized as the pioneer of Alternative Dispute Resolution (ADR) in the Philippines, said conditions for a judicial review show that the RH law should not be decided in court. Tadiar cited the fact that the SC issued a temporary restraining order on the law even before it was implemented.

The SC has decided to move the voting of the controversial law to April during its annual summer session in Baguio City, the Philippine Star reported.

Can sectarianism and RH law co-exist?

Tadiar wondered what could happen next if the Court rules the RH law as unconstitutional. (READ: RH law headed for defeat in SC?)

“What if SC rules RH law as unconstitutional? What is the next step? Can we take it to UN [United Nations]? Somewhere else? [Is there] any higher authority?” he said.

After all, he said it will be hard for sectarianism and the RH law to co-exist even in a democracy.

Tadiar noted that extreme sectarianism – which he defined as bigotry and an intolerance towards those who hold a different view – still exists from the national level down to the barangay (village) level.

Pope Francis and Manila Archbishop Luis Antonio Cardinal Tagle have called on Catholics to be open to dialogue instead of insisting on hardline positions.

“When these calls have been heeded, we will have erased extreme sectarianism and bigotry; achieved true democracy; strengthened the rule of law; and finally united the people of the Philippines as a meaningful nation,” Tadiar said.

Philippine Commission on Women chairperson Remedios Rikken told advocates to brace for more action even if the SC declares the RH law as constitutional.