Mar 14, 2014 5:57 PM PHT
Bea Cupin
Facebook Twitter Copy URL
Copied
SSupt Conrad Capa says he's taking the controversy, heartbreak, and disappointment in stride. Besides, he adds, 'You do not say no to the boss.' MANILA, Philippines – Two days after receiving his relief orders and a little over a week after capturing one of the Philippine National Police (PNP)’s most wanted, the police officer who led the arrest of Delfin Lee wants his boss to tell the truth about his “promotion.”

(Purisima is not being candid to the public. The public should know and I have to tell them that it’s not true. I don’t want to use stronger words so I’m saying it’s inaccurate, misleading but if they want me to use a more appropriate word, I will say that word.)

Short of saying it, Capa insinuated that Purisima lied about his (Capa’s) supposed promotion.

On March 6, Capa and his team arrested Delfin Lee, wanted for syndicated estafa charges over the alleged use of ghost borrowers to obtain P6.6 billion loans from Pag-IBIG Fund in 2000.

Six days later, Capa received his relief orders. By next week, Capa will leave Camp Crame to be the Deputy Regional Director for Operations (DRDO) in Cebu.

During a Thursday, March 13 press conference with reporters, Purisima said the promotion was a “reward” for Capa’s performance. “He has to occupy a position where he can be projected as general in the future,” said Purisima.

There’s a chance for promotion, but it will take time. “At the position he assigned me to, I will not be promoted there. The position does give a General rank. [Chief PNP Director General Purisima] was not very sincere, to say it nicely,” Capa said.

Capa reluctantly said Thursday that his relief was a reward. With his head clearer, Capa said it’s a ruse. He doesn’t see why he needs to move to Cebu, when there are “3 to 4” vacant positions in the PNP’s Headquarters in Camp Crame. “If [Purisima] wanted to reward me, he can give this to me,” Capa added.

Capa is already getting ready for his move to Cebu – fixing his belongings and filing reports. Still, he can’t wrap his head around Purisima’s decision.

“How can they explain this to the people? They are trying hard to explain. Puro spin, but the fact is: the position, DRDO is not a general rank. If I stay there for 6 months, one year, I will not be promoted,” said Capa.

Heading Task Force Tugis, said Capa, was not an easy pill to swallow. Task Force Tugis is a special group directly under Purisima, formed to nab the country’s “most wanted.” Capa has headed the Task Force since its inception mid-2013.

Because it’s a special group under the Chief PNP, it’s not part of the organization’s structure. According to Capa, time spent working in the Task Force doesn’t provide necessary “aging” to rise in the ranks. But he said, he took the position anyway.

“I took the job dahil nga gusto kong matulungan siya, at na-prepressure na siya dahil walang nahuhuli,” he said. (I took the job because I wanted to help [Purisima]. He was being pressured because no one was being arrested.)

Capa and Purisima go a long way, back to the younger police officer’s days as a lieutenant in Nueva Ecija, fresh from the Philippine Military Academy (PMA). They also worked together in Region 3 and in the National Capital Region. At one point, Capa was Purisima’s regional intelligence chief.

“I can claim that we are very close,” said Capa, adding that he and Purisima are masonic brothers.

And yet Capa has not spoken to Purisima since his relief. They were supposed to speak Thursday, but he said it did not push through. “I’m waiting for instructions to see him. Until then, I won’t go there. Baka ayaw niya akong makita,” he said. (He might not want to see me.)

Working as Task Force Tugis head was not easy. Purisima, said Capa, was under great pressure from none other than President Benigno Aquino III. “You cannot just imagine the pressure. Every month, every week I see him: Sino nahuli? Asan ang huli? Every single time that I visit him. Malakas siya mag follow-up,” he said. (Who was caught? Where are the wanted persons? He’s persistent in follow-ups.)

What bothers Capa the most are Purisima’s snide remarks against him, made during the Thursday press conference. Purisima said Capa wasn’t directly involved in Lee’s arrest, and that “Capa is not Task Force Tugis.”

“How painful is that sa akin as the commander? I planned this thing. I will take credit, ipagmamayabang ko yan hanggang sa Senate. I have records to show,” said Capa. (I’m proud of this accomplishment, I’ll say it even before the Senate.) 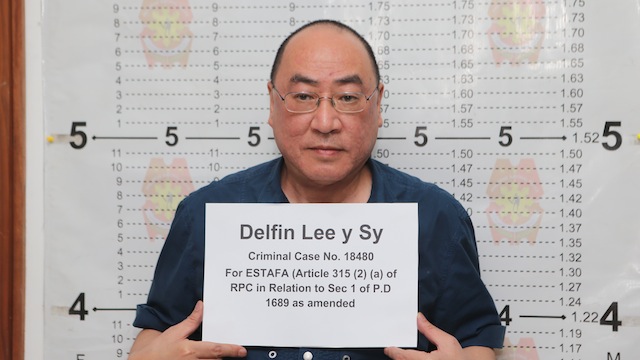 Lee’s arrest was hounded by controversy with his camp saying the arrest was “illegal.” His lawyers showed documents from the PNP that said the PNP’s Criminal Investigation and Detection Group (CIDG) had “delisted” Lee from its list of most wanted. Another document said Lee did not have any standing warrants of arrest, citing a Court of Appeals decision that quashed a warrant against Lee.

Purisima himself issued Lee’s lawyers a letter saying the PNP was in the process of “delisting” Lee, pending the final approval of Mar Roxas, the Secretary of the Interior and Local Government.

Capa said he knew of the letters by January or February 2014. But the task force head did not take the letters as cardinal truth.

Asked why Purisima would “reward” him with an abrupt reassignment, Capa only said: “I don’t know, somebody must have… all the intrigues and all, that’s it. What I’m saying is I don’t know what’s behind this.”

The Palace downplayed speculations on Capa’s relief. “As to the timing, I would not see anything behind the Chief PNP’s decision,” said presidential spokesperson Abigail Valte during a press briefing. Valte added that the PNP was planning a “congratulatory ceremony” for the Task Force.

“It was supposed to be a surprise but because of recent events that they had to say that ‘yes, something was indeed in the works for him and then for his eventual transfer,'” said Valte of the PNP.

Capa told Rappler he didn’t know of any “congratulatory ceremonies” being planned for the Task Force.

During the interview, Capa apologized for his actions on Thursday. The feisty officer held a press conference despite explicit instructions from higher ups. “Lumabas din ang di kagandahang asal ko,” he said. (My bad side came out.)

Amid the controversies he’s being caught in, Capa said he’s thankful for the support. “Everyone to my delight, everyone is supporting me. Upperclass, underclass, friends, everyone,” he said.

At least once during the interview, Capa had to step out to answer a call from a friend. One of Capa’s sympathizers is United Nationalist Alliance Secretary General and Navotas Representative Toby Tiangco.

In a statement, Tiangco questioned Purisima’s actions, saying he was “sending the wrong signal to members of the PNP.”

“Instead of inspiring our police force, the relief sends a chilling message that certain high-profile personalities are off limits,” said Tiangco in the statement. Tiangco also mentioned whispers within Crame that say Capa was sacked because he revealed Oriental Mindoro Governor Alfonso Umali’s call to Purisima during the arrest.

Capa has already denied such claims, and said he only contacted Purisima after the arrest was made. “I can tell you, nothing like that happened,” he added.

It’s been a childhood dream of Capa to join the PMA and be part of the police force. He said he’s taking the controversy, heartbreak, and disappointment in stride.

And besides, he added, “You do not say no to the boss.” – Rappler.com