Mar 14, 2014 6:41 PM PHT
Facebook Twitter Copy URL
Copied
Ex-congressman Marc Douglas Cagas IV does not explain why he said the SC's decision on the Davao Occidental plebiscite had a "level of deceitfulness" 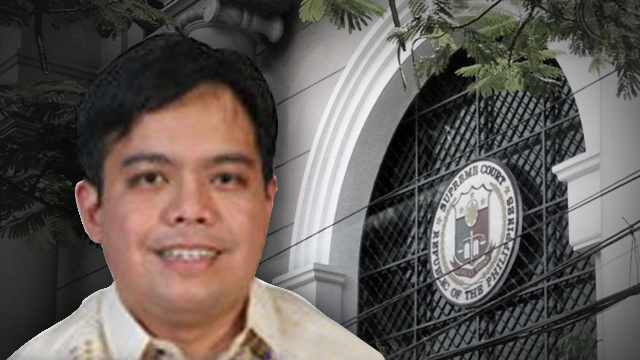 MANILA, Philippines – Former Davao del Sur congressman Marc Douglas Cagas IV is found guilty of indirect contempt of court for questioning the Supreme Court’s dismissal of his petition to stop the plebiscite on the creation of Davao Occidental province.

In its February 25 decision – made public on Friday, March 14 – the Supreme Court said it was not satisfied with Cagas’ apology following his “innuendos against the Supreme Court en banc” for dismissing his petition.

Cagas’ apology came after the Court ordered him on November 26, 2013, “to show cause why he should not be held in contempt of court” after they received a letter from him. The letter was sent after the Supreme Court unanimously dismissed on October 25 his petition to stop the October 28 plebiscite for the creation of Davao Occidental. 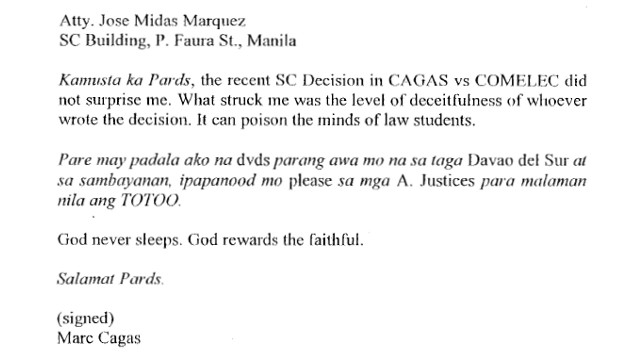 The letter was addressed to SC administrator Jose Midas Marquez, whom Cagas addressed as “Pards,” and was sent along with 15 DVDs that supposedly would back his criticisms of the Court decision.

Cagas sent on January 9 a compliance letter, where he apologized to the Court.

“With deep regret, [Cagas] admits that the said first paragraph expressed his emotional exasperation at the time the letter was written. [Cagas] got carried away by his passion and desire to improve the lot of his home province and its people, and for this he is truly sorry and takes full responsibility,” said in the compliance letter.

The Supreme Court, however, was not satisfied with Cagas’ explanation, saying he exploited his ties with Marquez to sway the members of the Court.

“Cagas’ exploitation of Court Administrator Marquez’s position is deplorable and is a prime example of an attitude that blatantly disregards Court processes,” said in the decision.

The Court added that Cagas did not give any explanation for saying there is a “level of deceitfulness” in the SC decision, and that the decision can “poison the minds of law students.”

Cagas authored the original bill that paved the way for the creation of Davao Occidental when he was still in Congress. In May, he lost his gubernatorial bid in Davao del Sur, the mother province that has since been tasked to manage the affairs of the new province until the 2016 elections.

The plebiscite pushed through despite Cagas’ objection, and majority of the voters voted “yes” to the creation of the new province, carved out of Davao del Sur. – Rappler.com