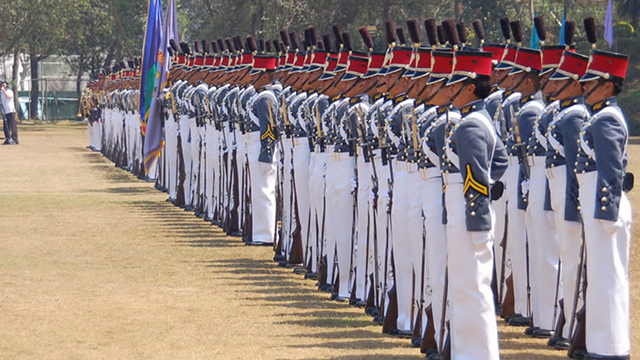 MANILA, Philippines (Updated) – Cadets at the Philippine Military Academy (PMA) knew something terrible had happened. During the nightly room inspections, many reported their missing roommates to be either “Resigning, Sir!” or “AWOL, Sir!”

Other rooms turned empty. Cadets disappeared night after night until up to 50 of them resigned or went on AWOL (Absence Without Leave), according to a recollection of one of those who left the academy at the time.

He refused to be named so let’s call him Larry. It was 1986, and an entire company of PMA cadets was accused of participating in a cheating ring, a violation of the PMA Honor Code. (A company is a military unit composed of anywhere between 80-200 soldiers)

Because of this, Larry left PMA with a broken heart, abandoning his dream to become a soldier. The class he belonged to originally had about 200 members.

He monitored the national controversy over the dismissal of Cadet Jeff Cudia, who was found guilty  of lying about the reason he was late in a class. Larry was devastated to discover that not much has changed since he was “unfairly” forced to leave PMA three decades ago. (READ: 2 minutes late for class, PMA cadet dismissed?)

This massive cheating committed by Larry’s PMA class in the late 1980s has become legendary in military circles.

It was such a sad time at the academy, recalled an underclassman of the batch involved.

And it all started with the story of a handsome cadet who was dating an instructor, who in turn leaked to him an examination paper.

On review night, cadets gathered to help each other study for the exams. This cadet – without saying it was a leaked reviewer – shared the paper with fellow cadets in the company, who also passed it on to other cadets in other companies.

The following day, they took the exam. Lo and behold! It was exactly what they had studied on review night. They were surprised, said Larry, but most of them kept quiet about it until one cadet reported it to the Honor Committee.

The PMA Honor Code implores cadets not to lie, cheat, steal, or tolerate those among them who do so. One by one the cadets went through the Honor Committee investigation. Others did not wait to be called; they just left PMA.

Larry said he certainly did not want to leave. While he knew he was guilty of violating the Honor Code, he felt that his infraction was not commensurate to a resignation. But his deeply ingrained commitment to the absolutes of the PMA Honor Code prevailed.

“I cried buckets,” he told Rappler.

There is one account from a former PMA cadet who said some cadets involved were able to evade the honor committee and managed to stay.

Honor violations are internal to the cadets but senior alumni eventually talk about them. Dismissal is all too common, but it is harder to get younger alumni to share these stories because they are still in the service.

Some of Larry’s former classmates are still active in the military.

Since Rappler broke the story on Cudia’s dismissal, we received several leads about other alleged injustices committed by the Honor Committee. They could not be immediately verified, however.

Because of Cudia, who failed to graduate on March 16, the Honor Code is now part of a heated national debate.

The defense-military establishment said it is reviewing the honor system to make it suitable to the times. Even the institution that the PMA looked up to as a model, the US Military Academy at West Point, introduced changes in its honor system after a cheating controversy 3 decades ago. The PMA Honor Code was copied from West Point.

Under the PMA’s Honor Code, Cudia was expected to “resign honorably.” But he chose to fight back – filing an appeal, accusing Honor Committee members of breaking the code themselves, and seeking an audience with the commander-in-chief, President Benigno Aquino III.

Cadets are wired differently. When they take their oath as plebes, these young men and women surrender their civil rights and subject themselves to military justice. This includes the belief that the Honor Committee, although composed only of students, is an absolute authority. It is a group that is utterly feared because it can make you leave the PMA.

“Although outsiders find them silly, the endless rituals of haircuts, saluting, and recitations are all statements of subordination,” writes Alfred McCoy in Closer than Brothers, a book on how the PMA molded officers who eventually shaped the history of the country.

The Honor System is central to the rewiring of the cadets from civilians to soldiers.

And for all the Philippine military’s ugly history, McCoy notes that the country has repeatedly resisted attempts to install a military regime, inspite of the trend that once swept the region. Military training at PMA, largely patterned after the US armed forces, may have helped instill the concept of civilian supremacy in soldiers, he argues.

The cadets are told that the Honor Code is absolute. Stealing 5 centavos is the same as stealing P5 million. Some would be so dedicated to the code that they report themselves for honor violations. It is better to admit your mistake than wait for others to report you.

In 1956, the entire cadet corps threatened to resign when outsiders intervened in their internal proceedings. This was another incident when the PMA’s Honor System grabbed headlines. (READ: Ex-AFP chief son ‘violated’ honor code)

In response to attacks against the PMA because of some of its alumni’s corruption record – the conversion and the pabaon systems, for example – PMA Class 1979 Honor Committee chairman Harlie Llave said: “It could have been worse if there was no honor code in the system. It serves as a deterrence to do something wrong.”

“We have all the power and we have low salaries. But because of the honor system, marami sa amin hindi garapal at hindi kurakot (many of us are not shameless and corrupt),” he added.

Cudia’s story provided civilians a rare glimpse into the secretive proceedings of the military school. It also made alumni realize that the honor system has been tweaked through the years.

In the past, the Honor Committee voted on a case only once. The PMA alumni would discover that “chambering” is now allowed in the proceedings. When the result of the vote is 8-1 or 7-2, the members discuss their votes and they will repeat the voting.

One member of the Honor Committee voted to acquit Cudia in the first vote but he changed his mind in the second vote.

PMA alumnus Dado Enrique is opposed to the change. A former chairman of the Honor Committee, he surprised cavaliers when he took on Cudia’s battle and agreed to become his foster parent.

“Do not cover up the 8-1 that became 9-0 and explain to me that it is the current practice. Shame on you all,” he posted on his Facebook page. He filed a case against the members of the Honor Committee who declared a guilty verdict on Cudia.

All throughout the controversy, the PMA had been tightlipped about the details of Cudia’s case. But PMA Commandant Colonel Rozzano Briguez eventually explained that there was no irregularity because these changes in the voting process have been accepted by the cadets.

Explained Llave: “People focus on the process as if finding fault in the Committee when the real fault is… Cudia’s lying. The committee’s process is theirs alone and no one can change that or dictate how it should have been.”

Other supposed changes in the honor system continue to split the alumni.

“The system is dynamic. It adjusts to the requirements of the present time,” said PMA spokesperson Major Lynette Flores. “Nonetheless, even though the procedure and some aspects of the system will be changed, kung mayroon man babaguhin (if there are some things that would be changed), the tenets of the honor code – ‘We, the cadets do not lie, cheat, steal, nor tolerate among us those who do’ – hindi po iyon magbabago. ‘Yun ang basic (That will not change. That is basic),” Flores said.

But after years of reflection on the 1986 incident, Larry realized that there is something missing in the PMA honor system.

“The PMA should also teach justice, not only honor,” said Larry. “When you impose a harsh and cruel penalty on a small offense, it is an injustice.”

He is concerned about how severe punishments could adversely affect the future of cadets. “If that is the culture imbibed by the cadets, when they go out, they could actually impose heavy penalties on small offenses. They could impose unjust and unfair penalty on small offenses,” he said.

The attacks against the PMA “where I spent some of the best years of my life” are painful, said Larry. But he is also “glad” because he sees an opportunity for the academy to “improve.”

The PMA spokeswoman welcomes the President’s decision to re-investigate Cudia’s case.”I do hope this will open an opportunity for the public to really weigh the sides, not only the one they seemingly perceived because of the information released by the side of Cudia. The PMA now will be given the opportunity to explain why they will decide this way,” said Flores.

The controversy comes at a perfect time because the PMA system is currently under review. The issue of honor, after all, is bigger than Cudia’s graduation.

The military hierarchy appears to be ready for reforms. “Mayroon kailangan pag-aralan kasi may mga hindi na angkop (Some aspects have to be studied since some are no longer appropriate),” Defense Secretary Voltaire Gazmin told reporters on Sunday, March 16, after the graduation rites. He is a PMA alumnus himself who would rise in the ranks to become the chief of the Philippine Army.

Larry explained that reform doesn’t mean changing the honor system drastically. He supports an earlier proposal of graduated penalty for violators – demerits and touring for the first offense, suspension for a second offense, and dismissal for a third. But it was not carried out.

West Point’s own cheating controversy in 1976 led to modifications to its honor system to allow a “developmental alternative” to the previous single sanction of permanent separation. A cadet is given the option to stay under supervision, for example.

It’s a proposal that will certainly meet opposition. Llave is among those who are lukewarm to the idea. “A half lie is still a lie,” he said. “A cadet found guilty has lost his moral ascendancy and is no longer effective within the cadet corps. Let violations of regular sanctions be made in a graduated manner. But not honor violations.”

Larry, however, argued: “Character formation is a process. You also want the cadets to really believe in the system, not just fear it.” – Rappler.com