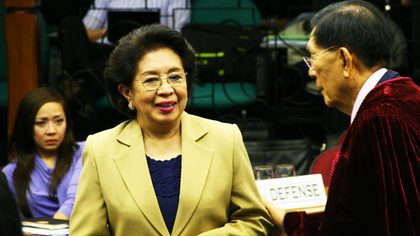 Morales said they could not determine the total ending balance because of the circuitous transactions, among others. But during a Powerpoint presentation that illustrated Corona’s bank transactions, Morales said there were $12-M in “fresh deposits” or money that did not move from one account to another.

The total inflow was US$28-M but the total outflow was US$30-M. Commission on Audit Commissioner Heidi Mendoza said the withdrawal is bigger because they only based their analysis on AMLC transactions. (Banks are required to submit to AMLC records of activities amounting to P500,000. Transactions involving lower amounts need not be submitted.)

Morales submitted to the Senate court a 17-page report from the AMLC enumerating the “complete” AMLC transaction records of Corona from April 2003 to December 2011 — or a total of 705 transactions made in the name of Corona and which involved peso and foreign currency accounts.

Morales also noted that Corona made significant withdrawals in the 2004 elections, as well as the week he was impeached.

Based on the presentation of Morales, the breakdown of accounts is as follows:

The Chief Justice does not necessarily have accounts in all the banks listed in the AMLC report. Some banks may have been the recipient of the money transfers from Corona’s bank accounts.

The AMLC documents were provided by AMLC executive director Vicente Aquino to the Ombudsman. To analyze the records, Morales sought the assistance of Commission on Audit chair and commissioner Grace Tan and Heidi Mendoza, respectively.

Heidi Mendoza was the COA auditor that investigated the United Nations dollar funds for the Armed Forces of the Philippines peacekeeping missions. It led to the discovery that then AFP comptroller Gen Carlos Garcia kept multimillion dollar deposits.

In her powerpoint presentation, Morales cited the following “significant observations.”

It was the defense panel that requested to subpoena the Ombudsman. She was declared a hostile witness.

In April, the Ombudsman wrote Corona to make him explain assets–including at least US$10-M–which was purportedly disproportionate to his assets.

Morales said she did not think it was necessary to include in her letter to Corona that the AMLC was her source.

The defense tried to block the presentation of Corona’s detailed bank transactions, but the senators took a vote and allowed it.

Members of the prosecution said they were shocked by the revelations on Day 37 of the impeachment trial.

“It’s definitely a bombshell that was dropped by the Ombudsman today. We’re still busy digesting the gravity of the evidence presented, especially this massive movement of funds. In a span of 8 1/2 years, from one account it became 82 accounts. Definitely a lot of money involved. This is a turning point in the trial,” said prosecution spokesperson Sonny Angara.

“We agreed that we should not celebrate yet because there’s no conviction yet. We will wait until the day of the verdict. But now we are confident. We knew from the very beginning that there are bank accounts. We did not imagine na ganito kalaki. Mukhang professional money laundering ang pattern,” said Tupas. – Rappler.com