Mar 26, 2014 12:02 AM PHT
Buena Bernal
Facebook Twitter Copy URL
Copied
His lawyer argues that while his client admitted participation in the pork barrel scam, it does not mean he benefited financially. Besides, he should be covered by immunity from criminal prosecution granted under the Witness Protection Program. 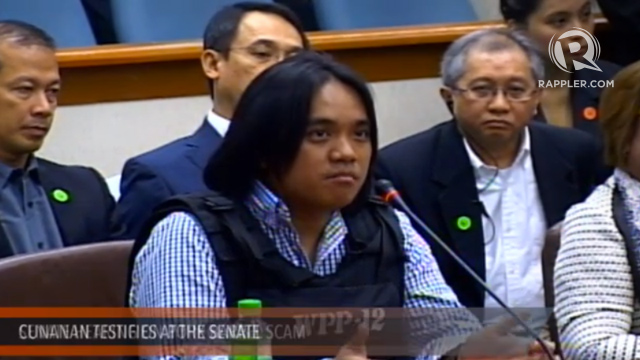 MANILA, Philippines – The camp of pork barrel scam whistleblower Benhur Luy maintains that his status as a state witness exempts his assets from court-issued freeze orders.

In an interview Tuesday, March 25, Luy’s legal counsel Raymond Joseph Ian ‘Raji’ Mendoza said that the assets forfeiture case against Luy should be covered by his immunity from criminal prosecution granted under the Witness Protection Program (WPP).

“Even if the (assets forfeiture) procedure is civil in character, the nature of the penalty is penal. Can you just take property? It goes into the substantive rights of a person,” he told Rappler.

Mendoza was responding to the reply-comment filed Tuesday by the Anti-Money Laundering Council (AMLC) through the Office of the Solicitor General (SolGen) on the case before the Manila Regional Trial Court (RTC) Branch 22.

The Manila RTC is hearing the forfeiture proceedings on assets allegedly acquired from the illegal siphoning of the lawmakers’ Priority Development Assistance Fund (PDAF).

Select bank accounts and vehicles of Luy were covered by a Provisional Asset Preservation Order (PAPO) issued and later on extended by the same court.

The PAPO also covers select properties of other suspects in the PDAF scam, including those of alleged scam mastermind Janet Napoles and her family members. (READ: Napoles family can’t touch assets – court)

In its reply-comment before the Manila RTC, the SolGen cited a Supreme Court (SC) August 1962 decision tagging as “civil” the assets forfeiture case of a government employee.

But Luy, in his earlier comment before the court, already cited a newer and separate jurisprudence that tagged as “criminal” property forfeiture proceedings.

“As a consequence, proceedings for forfeiture of property are deemed criminal or penal, and, hence, the exemption of defendants in criminal case from the obligation to be witnesses against themselves are applicable thereto,” the court ruled.

The case cited by Luy stemmed from the administrative charge against former Armed Forces Chief of Staff Manuel Cabal over unexplained wealth that was eventually interpreted by the High Court as an assets forfeiture case.

“It seems, likewise conceded that the purpose of the charge against petitioner is to apply the provisions of Republic Act No. 1379, as amended, otherwise known as the Anti-Graft Law, which authorizes the forfeiture to the State of property of a public officer or employee which is manifestly out of proportion to his salary as such public officer or employee and his other lawful income and the income from legitimately acquired property. Such forfeiture has been held, however, to partake of the nature of a penalty,” read the ruling.

The ruling on Cabal’s case was issued by the High Court in December 1962, 4 months after the ruling cited by the SolGen was issued.

Mendoza is confident that the allegation of ill-gotten wealth over the subject assets of Luy won’t stand.

“We don’t believe that the AMLC through the SolGen can prove that Luy’s bank accounts and personal properties ay galing sa (came from an) illegal source,” he said. The AMLC is the country’s financial intelligence unit.

The lawyer stressed that Luy was an employee of Napoles receiving compensation based on the work he rendered.

“While Luy admitted his participation in the pork barrel scam, it doesn’t mean that he benefited financially,” he added.

The diversion of lawmakers’ PDAF to bogus projects was allegedly masterminded by Napoles, whose NGOs served on paper as fund beneficiaries.

The sham was exposed by Luy, who was rescued by agents of the National Bureau of Investigation in March 2013. He was allegedly illegally detained by his two cousins, Napoles, and her brother Reynald Lim. (READ: Benhur Luy was never detained, court told) – Rappler.com