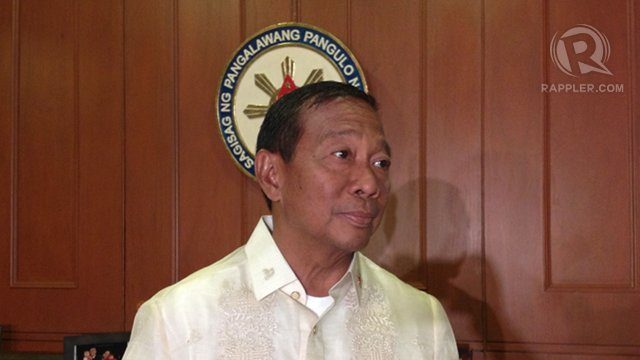 Facebook Twitter Copy URL
Copied
'If it stops with the filing of the plunder cases against 3 senators who are not political allies, it will create the impression that political partisanship is the sole motivation behind these charges,' says Binay

MANILA, Philippines – Vice President Jejomar Binay urged the government to investigate Aquino allies implicated in the pork barrel scam, saying his partymates should not be the only ones facing charges.

Binay said the Ombudsman’s decision to file plunder charges against Senators Juan Ponce Enrile, Jinggoy Estrada and Ramon “Bong” Revilla Jr is a “test of the fairness and trustworthiness of our legal system.”

“The case will also test if the drive for reforms will be blind to political motives. If it stops with the filing of the plunder cases against 3 senators who are not political allies and confines itself to the Napoles case, it will create the impression of being selective, and that political partisanship – not justice – is the sole motivation behind these charges,” Binay said in a statement on Wednesday, April 2.

Binay’s statement comes a day after the Ombudsman announced it found probable cause to file plunder charges against the 3 senators for allegedly endorsing the bogus nongovernmental organizations (NGOs) of scam mastermind Janet Lim Napoles in exchange for millions of pesos in kickbacks.

The Vice President heads the opposition coalition, and is a close ally of Enrile and Estrada.

Binay said that the Commission on Audit (COA) mentioned other lawmakers and fake NGOs in its audit report released last year.

“We hope the concerned government agencies will act on these findings with the same determination and focus displayed in the Napoles case. The public would want no less than full accountability from its public officials. The rule of law must prevail regardless of stature or political affiliations,” Binay added.

With key allies now facing prosecution and arrest, Binay said he expected them to get fair treatment.

“In the event that the ombudsman denies the motions for reconsideration and proceeds with the filing before the Sandiganbayan, I am confident that our courts will accord the 3 senators their right to a fair trial as provided for by the Constitution.”

Cayetano called on Binay to categorically say that the case will proceed even if he wins as president in 2016. The senator also hit Binay for saying he is considering Estrada as his running mate even after his ally was implicated in the scam.

In response, the Vice President said allegations that his allies will be acquitted under his leadership are “far-fetched.” He maintained that they are innocent until proven guilty.

Jinggoy to return after Holy Week

Estrada reiterated his claim that the filing of plunder charges against him, Enrile and Revilla was selective and politically motivated.

“It took them only 6 months to read voluminous documents. They said they had truckloads of evidence against us….And in the end, it’s just us 3 opposition senators highlighted there. There are no administration lawmakers. It’s highly suspicious,” Estrada said in a phone interview with ABS-CBN from Los Angeles on Wednesday.

The senator insisted he will return to the Philippines after the Holy Week to face the charges. He added that he is not afraid of being arrested.

(I was imprisoned before. I am used to being imprisoned. They sent me to jail for two years.)

Estrada faced his first plunder charge after his father, former President Joseph Estrada, was ousted from office in 2001. The court acquitted him after he rebutted witnesses’ testimony with documentary evidence.

The senator said he will appeal the Ombudsman decision on the pork barrel scam on Monday but expects his motion for reconsideration to be denied.