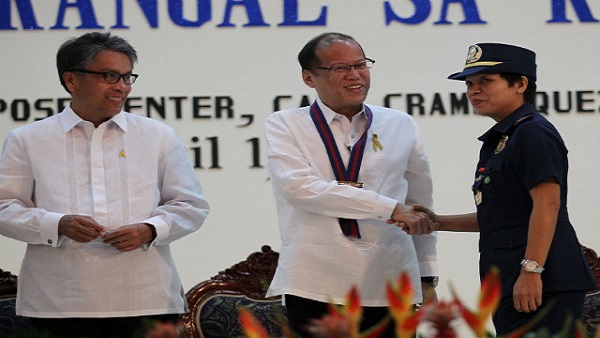 The Philippine National Police (PNP) paid tribute to its ‘everyday heroes’ on Monday, April 1 at special recognition rites attended by President Benigno Aquino III. The PNP recognize 38 members – both police officers and non-uniformed staff – for their dedication and service during the biggest calamities in 2013 as well as in its anti-crime and anti terrorism campaigns. The sole non-uniformed personnel awardee, Noli Cua dela Cruz, rescued 10 families from the storm surges in Barangay 89 of Tacloban City. Dela Cruz and his families knotted together their clothes, using them to rope in their neighbors into the safety of his brother’s house. Another Tacloban police officer, Police Inspector Marjorie Lubo Manuta, was awarded the PNP Merit Award for being one of only 20 police officers to report to work after Yolanda.