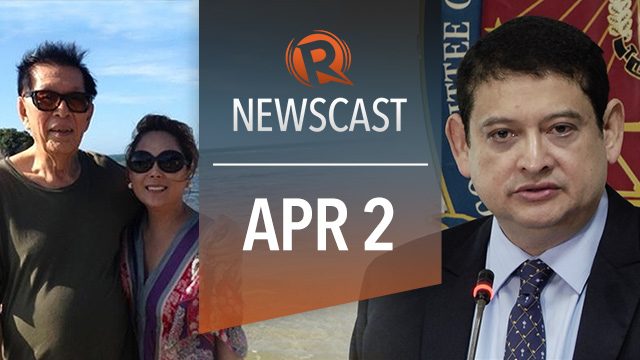 Story 1: DISBAR OR DISCIPLINE ENRILE, REYES – SENATE REPORT
Senate blue ribbon committee chairman TG Guingona says the lawyers implicated in the pork barrel scam should either be disbarred or disciplined.
The draft committee report refers Senate Minority Leader Juan Ponce Enrile, his former chief of staff, Gigi Reyes, Senator Bong Revilla’s political staff Richard Cambe and other legal counsels to the Integrated Bar of the Philippines and the Supreme Court for disbarment or disciplinary proceedings.
The report also recommends plunder charges against Enrile, Reyes, Revilla, Cambe and Senator Jinggoy Estrada for allegedly conniving to funnel public money to the fake NGOs of mastermind Janet Lim Napoles.
The unsigned report released Tuesday also recommends policy reforms on NGO accreditation and audit.
While the lawmakers blamed implementing agencies, the report says the 3 senators are liable for –quote– “fundamental failures in the handling of these funds.”
The report says the senators did not take prompt action to stop the scam, they interfered in the implementation of projects, and they did not check the legitimacy of the NGOs they endorsed.

Story 2: BINAY: PROBE AQUINO ALLIES IN PORK SCAM TOO
Vice President Jejomar Binay says the filing of cases over the pork barrel scam should not stop with opposition senators.
Binay says the Ombudsman’s decision to file plunder charges against Senators Enrile, Estrada, and Revilla is a –quote– “test of the fairness and trustworthiness of our legal system.”
He says the Commission on Audit also mentioned other lawmakers in its report released last year.
The Vice President heads the opposition coalition, and is a close ally of Enrile and Estrada.
With key allies now facing prosecution and arrest, Binay says he expects them to get fair treatment.
He adds, “The rule of law must prevail regardless of stature or political affiliations.”

Story 3: SOCIAL MEDIA POST OF THE DAY
For our social media post of the day…
Netizens react to Vice President Binay’s call for a probe into President Aquino’s allies involved in the pork barrel scam.
Saldy Bonifacio says, “Binay is obviously politicking, trying to project himself as ‘clean.’”
But Jenny Ng Cheng says, “This time I agree with his statement. We certainly don’t care which party a crook belongs to, because these politicians are opportunists.”

Story 4: SANTIAGO: HARD FOR SENATORS TO AVOID JAIL TIME
Senator Miriam Santiago says it’s only a matter of time before the 3 senators involved in the pork barrel scam land in jail.
Santiago says Senators Enrile, Estrada, and Revilla can appeal the plunder charges filed against them, but says it will be hard for them to evade arrest.
Under the graft court’s rules of procedure, an arrest warrant will automatically be issued once charges are filed.
The senators will then be automatically suspended from office.
Santiago says the burden is on the 3 indicted senators to prove the case against them is weak.
Santiago also stresses the significance of the indictment of Enrile, who was Senate President in the 15th Congress.
She says, “This is the very first time in our history a Senate President has been indicted.”
“What kind of Senate will elect a Senate President…a man who ultimately turns out to be one of the biggest thieves in the country?”

Story 5: MIRIAM: BANGSAMORO DEAL ILLEGAL, CREATES SUBSTATE
Senator Santiago says the final peace deal between the government and the Moro Islamic Liberation Front is unconstitutional.
Nearly a week since the historic signing of the peace pact, Santiago says the deal creates the Bangsamoro as a substate instead of a mere autonomous region, and –quote– “appears to facilitate” its secession.
Santiago is the first senator to call the deal unconstitutional ahead of congressional debates on the Bangsamoro,
a region with wider political and economic powers replacing the Autonomous Region in Muslim Mindanao.
The senator calls “ridiculous” a provision saying the agreement embodies the consent of the executive branch to amend the Constitution to accommodate the deal.
She also says the deal “attempts to redefine the sovereignty” of the Philippines when it listed the powers the central government can retain.
Santiago, the chair of the Senate committee on constitutional amendments, hints she will not support the Bangsamoro Basic Law, which will formally create the Bangsamoro.
Her statement comes after congressional leaders and peace panels gave assurances the Bangsamoro law will be faithful to the Constitution.

Story 6: CHINA SAYS TIES ‘DAMAGED’ BY PHILIPPINES UN RULING CALL
China warns the Philippines “seriously damaged” ties with Beijing by asking the United Nations to rule in its favor in a maritime dispute.
On Sunday, Manila submitted nearly 4,000 pages of evidence to an international tribunal… to back its case against Beijing’s expansive claims over the South China Sea.
In a statement, charge d’affaires Sun Xiangyang of the Chinese embassy in Manila urges the Philippines to –quote– “correct its mistake and come back to the right track of resolving the disputes through bilateral negotiations.”
Apart from China and the Philippines, other countries also claim parts of the sea.
But China prefers to negotiate with the countries individually, rather than through international fora.

Story 7: CHILE ORDERS EVACUATION AS 8.2-MAGNITUDE QUAKE KILLS 5
A powerful 8.2-magnitude earthquake hits the coast of northern Chile late Tuesday — Wednesday morning in Manila.
The quake triggers a tsunami over 6 feet high as aftershocks shook the country.
Panicked residents pour into the streets after authorities ordered them to flee to higher ground.
The quake cuts power and communication lines, and damages several roads.
At least 5 people are dead and $30 billion in infrastructure are damaged.
In the town of Iquique, about 300 prisoners escaped.
Chilean President Michelle Bachelet declares parts of northern Chile disaster zones.
Bachelet says military will be deployed to prevent looting and disorder.
Chile is an earthquake-prone country because it’s located in the Ring of Fire.
In February 2010, about 500 people were killed when a 8.8-magnitude earthquake struck Chile.
Last month, a 6.7 magnitude quake hit the country’s northwestern coast.

Story 8: MALAYSIA POLICE SAY MH370 MYSTERY MAY NEVER BE SOLVED
Malaysia’s top police official says the mystery behind the disappearance of Malaysia Airlines Flight MH370 may never be solved.
The 3-week-old investigation has so far been inconclusive, as officials try to find out why the plane diverted from its path on March 8, on a flight from Kuala Lumpur to Beijing.
Malaysian police say they are investigating the background of all 239 people on board, which include 12 crew members.
Inspector General of Police Khalid Abu Bakar says, “Give us more time…We may not even know the real cause of this incident.”
Khalid says police recorded more than 170 statements so far.
Police say no passengers were suspected in any hijacking or sabotage.
The probe focuses on the possibility of a hijacking, sabotage or psychological problems among passengers or crew.

Story 9: THE wRap: YOUR WORLD IN ONE READ
At number 6, pro golfer Tiger Woods announces he won’t be playing in the Masters on Thursday.
Woods had back surgery earlier this week to treat a pinched nerve troubling him for months.
It will be the first time Woods missed the Masters since 1995.
Woods is a 14-time major champion, chasing golf legend Jack Nicklaus’ all-time record of 18 majors.
At number 9, fans of the hit TV series ‘How I Met Your Mother’ express mixed reactions at the finale which aired Tuesday in the Philippines.
The flashbacks and plot twists left fans both amused and angry, with many taking to social media to express their emotions.
The series revolves around Ted, played by actor Josh Radnor, telling his two children about his youth up until the day he met their mother.
The series ran for 9 long seasons, from 2005 until 2014.
And at number 10, April Fool’s Day passed by with hardly any wild antics in the Philippines.
But in the United States, many companies take April Fool’s seriously.
Some of the crazy stunts include Twitter’s roll out of the Twitter Helmet, TripAdvisor’s vacation recommendations on fictional locations, and Google Maps’ Pokemon Challenge.