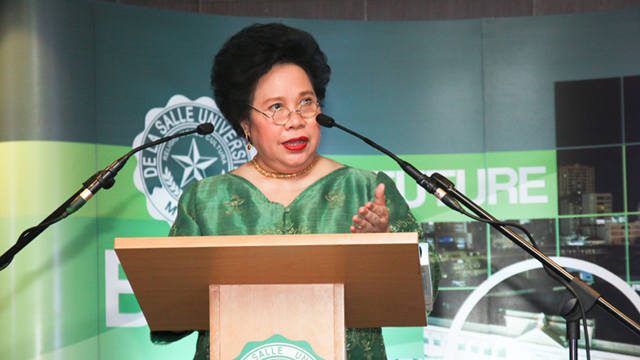 Facebook Twitter Copy URL
Copied
If other senators implicated by pork scam whistleblowers will be probed, Santiago says it's 'possible the Senate can be diminished by 6, 7 senators'

MANILA, Philippines – “That will be payback time!”

Senator Miriam Defensor Santiago hailed the Ombudsman’s decision to file plunder charges against 3 senators over the pork barrel scam as a “kick ass resolution,” saying it is only a matter of time before they land in jail.

Santiago said her archenemy Senate Minority Leader Juan Ponce Enrile, and senators Jinggoy Estrada and Ramon “Bong” Revilla Jr can appeal the resolution but it will be hard for them to evade arrest by securing a temporary restraining order (TRO).

The constitutional law expert said under the Sandiganbayan’s rules of procedure, the Court will automatically issue an arrest warrant once charges are filed before it. The senators will then be automatically suspended from office.

“To evade jail time at that point, the accused will have to run to an appellate court and try to stop it, which will be very difficult because normally the superior courts never enjoin processes in the lower level. They already do that when the trial is in full swing or even after trial so it will be very difficult to [get] a TRO,” Santiago told reporters in Olongapo City on Wednesday, April 2.

Her statement came a day after the Ombudsman announced it found probable cause to file plunder charges against the 3 senators and alleged scam mastermind Janet Lim Napoles.

Santiago expressed her admiration of Ombudsman Conchita Carpio-Morales for deciding to file the charges even if “she’s up against extremely powerful people.”

“But then in a society that already convicted a president who was ultimately granted a pardon, … and trying to prosecute another president, that is another progression I think in the attitude of our people. They now understand what is the meaning of the rule of law,” she said.

Yet the senator said the Senate and the government must not stop with investigating the 3 senators in court and in the Senate ethics committee. She said the next step will be to probe the other senators mentioned in the multi-billion-peso pork barrel scam.

“We receive this electric shock running through our system but, still, there have to be aftershocks, meaning to say, let’s look at the affidavits of the whistleblowers and see who else were named there. They were named cursorily in the past media coverage, but the attention was focused on the top 3. Now that we have in the process resolved the initial hurdles, we should now go to the next ranking senators.”

Santiago quipped, “It is possible the Senate can be diminished by 6, 7 senators.”

Santiago added that the burden is on the 3 indicted senators to prove that the case against them is weak.

Santiago also commented on the decision of Senate blue ribbon committee chairman Teofisto “TG” Guingona III to release a report on the scam even before the panel members got a copy and signed it. Guingona recommended the filing of plunder charges against his colleagues.

Santiago said Guingona’s office contacted her before the release of the report, and she had no objection to it.

“That is the prerogative of the chair of the committee. Each of us are chairs of certain committees and we do no want other persons interfering with our committees. I think what was uppermost in his mind was possible interference from the 3 senators most affected but I agree with that procedure because otherwise, there will be no more news on the release of the partial report since the Ombudsman was set to make an announcement yesterday.”

‘What kind of Senate elects a thief?’

Santiago stressed the significance of the indictment of Enrile, who was Senate President in the 15th Congress.

“This is the very first time in our history a Senate president has been indicted. That is an indictment not only of the Senate president involved but also of the entire Senate. What kind of Senate will elect a Senate President, a man who ultimately turns out to be one of the biggest thieves in the country?” she said.

The senator could not help but attack another rival, former senator and now Rehabilitation Secretary Panfilo Lacson.

“I have two major enemies in the Senate. One has been indicted. What happens to the other person who was trying to libel me in defense of my major enemy? Di ba birds of the same feather flock together?”

(Lacson should also be investigated. I will file a resolution to investigate him. Why does he love Enrile so much when the Ombudsman said he’s a thief. Why do they leave each other so much?) – Rappler.com