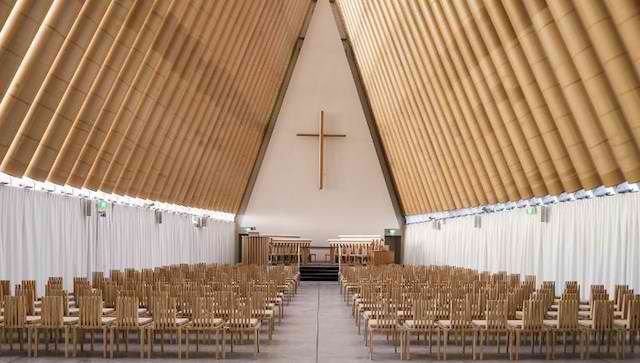 MANILA, Philippines – The top architect of Japan unveiled on Wednesday, April 2, his latest social housing project: he will build comfortable and economical housing made from foam walls covered with fiberglass.

This should be good news for Filipinos – Shigeru Ban wants his first factory for these new models to be set up in the Philippines, where thousands were displaced by a series of natural calamities last year.

Ban was awarded the 2014 Pritzker Architecture Prize last week for his work using cardboard to make temporary housing for refugees and disaster victims.

He said he wants to work not only for the privileged but for the less well-off, as he unveiled his latest social housing project.

“When I became an architect I was very disappointed about professional architects,” said Ban on Tuesday, April 2.

“Actually we are mostly working for privileged people, people with money and power,” he told reporters in Tokyo.

Ban, who works in disaster zones and with private clients, has spent about two decades travelling the world to help design low-cost but dignified housing and community buildings in hard-hit areas.

His best-known works included a paper cathedral in earthquake-hit Christchurch in New Zealand, and temporary housing made from cardboard tubes in Japan following the 2011 quake-tsunami disaster.

“I thought we can use our experience and knowledge to work for the public, even the people who lost their houses in natural disasters…. That is why I started doing this,” he said. “And I try to make my own balance working for the privileged, because I have to work for them to make money.”

His latest projects include the development of temporary homes using materials produced in developing countries, which he says should create jobs and alleviate housing problems in poorer parts of the world.

Doctors and lawyers serve the poor as well as the rich, Ban said. “So I thought architects, too, we have other social roles.” – with a report from Agence France-Presse/Rappler.com