Serge: 2016 about management, not just corruption 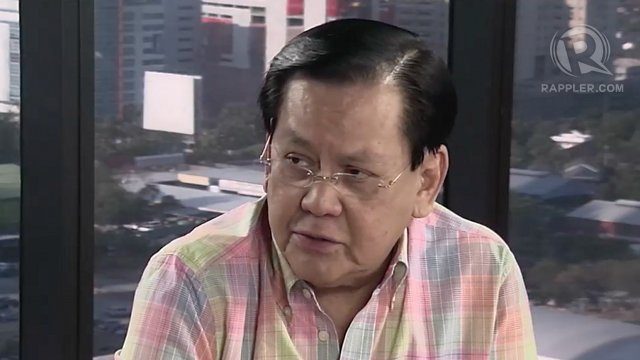 MANILA, Philippines – “Kung walang korupt, walang mahirap. After 6 years, when [Filipinos] find out their economic wellbeing hardly improved, that emasculates that argument.” (If there is no corruption, there is no poverty.)

Senator Sergio “Serge” Osmeña III said President Benigno Aquino III and his administration will have to focus on improving management of the country because it will be a key election issue in 2016.

The senator who called the President an “awful manager” said Aquino can no longer just rely on his anti-corruption message if he wants to ensure that a partymate succeeds him in 2016. Osmeña was Aquino’s 2010 campaign manager, who crafted his message for that year’s presidential election.

“There would be a natural progression from kung walang korupt, walang mahirap message of the Noynoy Aquino campaign in 2010 because the most important part of that message is the second part: walang mahirap. That’s where people are affected,” Osmeña said in an interview on Rappler’s #TalkThursday on April 3.

The Aquino administration has been hailing the improvement in the economy but Osmeña said this was jobless growth where “the rich are getting richer and the poor are getting poorer.”

Osmeña said the Philippines might experience what he calls a Clinton syndrome in 2016. He compared the scenario to former US President Bill Clinton’s 1992 campaign against then incumbent US President George H. W. Bush.

“Bush just triumphed in the Iraq-Kuwaiti war and he was bragging about it all throughout the campaign but the economy was beginning to tank in the US because of the overspending of [former US president Ronald] Reagan. It was beginning to show up so Clinton came out with the tagline, ‘It’s the economy stupid.’ And he won against a sitting president, which is rare in American history.”

Beyond the anti-corruption campaign, Osmeña said voters will look for competence.

“They might like Noynoy personally but it does not mean it will translate to whoever he endorses for the presidency. If I were handling whoever that guy will be, I’d say you will now bring your debate in the area of competence in public service. I’ll promise a better life, more jobs, better education for your children.”

Osmeña created a stir for his scathing criticism of Aquino and the so-called NPAs or Non Performing Assets in the Cabinet. He cited the power shortage and delays in infrastructure and transportation projects as consequences of bad management.

He further explained why he is not impressed with the administration.

“Why don’t we reach targets? Sometimes, it’s impossible. You have disasters, [Typhoon] Yolanda, but when somebody is lazy and doesn’t make the management moves required, I find fault. I don’t regret supporting the President. He’s still the best among candidates. I was hoping he’d be able to perform and make the hard management decisions and he hasn’t been making them.”

Asked about the Aquino “awful manager” remark, the senator quipped, “Full of awe!”

Known as a sharp political strategist, Osmeña weighed in on possible candidates in the national polls. He started off with the Senate frontrunner he mentored in the 2013 polls.

“You’ve got a marvelous candidate in Grace Poe. Bam Aquino should also be considered although most people say he’s too young, although he’s a very bright fellow and might make up a lot of ground in two years,” he said.

He also named Senator Francis Escudero, who, he said, was considered for the presidency as early as 2009.

Asked if Escudero still has a chance, Osmeña quipped, “Why not? He has heart now,” a play of words referring to Escudero’s girlfriend, actress Heart Evangelista.

Osmeña also commented on the campaign to encourage controversial Davao City Mayor Rodrigo Duterte to run for president. He said the mayor is popular but because he is in Davao, his awareness is limited to voters in Mindanao and Metro Manila.

“That’s not good enough,” Osmeña said. “He’s seen as a problem solver, good manager in that sense, and that’s what people are looking for, that’s why he seems to be an attractive candidate for the presidency. I would like him to come to Manila and use this as his base so he can be projected nationwide.”

With all the posturing and floating of names, Osmeña said one consideration constantly shapes Philippine elections: surveys.

The man known for his keen use and analysis of surveys said he will soon commission his first survey for 2016.

“Probably next month, a month after, just to give me a general indication of who are the type of people you can expect to make progress, if it can be called progress, and who are the types of people you should reject because they are way too low and would not have the organization, professional assistance to move their candidacy forward.”

On Vice President Jejomar Binay, Osmeña said the politician seen as the 2016 frontrunner will have to consider corruption as an election issue.

“The most vulnerable point of any politician in this country is to be accused of corruption. Even in Russia, China they’re undertaking a huge purge….So corruption will always be one of the biggest no-nos in politics, and I think that’s great because it seems the whole world is coming together on that.”

“I’ll say they were damaged. Whether they were irretrievably damaged remains to be seen. So I’ll wait ‘til the surveys come out. I won’t show it to anybody,” he said then laughed.

Osmeña said that in 2016, as in past elections, message will be a crucial factor.

What should then be the message of the next president?

“He should be able to say, ‘I’m clean but I can manage better’ so the debate now will start concentrating or focusing on the management side, on the ability to deliver what the people want delivered to them.” – Rappler.com