Miriam: I’m not out to scuttle Bangsamoro deal 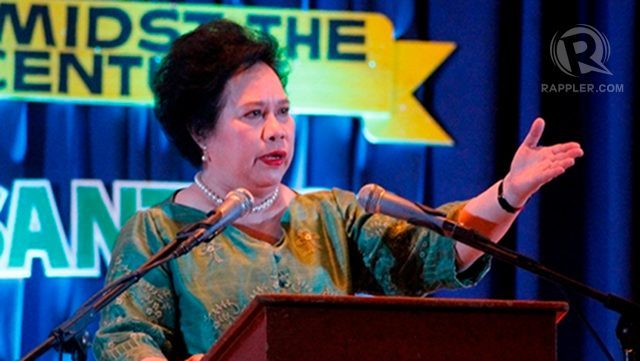 Facebook Twitter Copy URL
Copied
Santiago takes a constructive tone, saying she is 'engaged in forward thinking' about the consequences of the deal

MANILA, Philippines – Senator Miriam Defensor Santiago clarified that she does not mean to undermine the Bangsamoro peace deal by calling it unconstitutional.

Two days after saying she encouraged groups to question the deal before the Supreme Court, Santiago used a more constructive tone in her letter.

“My interest is not to scuttle the [Framework Agreement on the Bangsamoro], but to ensure that it will be able to stand scrutiny in the Supreme Court. I am also engaged in forward thinking about the eventual consequences of the FAB,” Santiago said in her letter on Friday, April 4.

Santiago told Ferrer she will send her a legal memorandum next week explaining her media statements.

The senator said the deal was unconstitutional because it creates the Bangsamoro as a substate instead of a mere autonomous region, and diminishes Philippine sovereignty by listing what powers the central government can retain.

The constitutional law expert welcomed Ferrer’s response that she prefers to schedule a meeting with Santiago instead of addressing the criticism in the media “in bits and pieces.”

“I am glad that you think a meeting between the two of us would be productive for the public interest. I take this matter seriously and I shall work on a brief legal memorandum for you,” Santiago said.

“Thank you for your courtesy and civility in dealing with media questions raised over the Framework Agreement on the Bangsamoro, based on my remarks in my recent commencement speech in Olongapo City,” she added.

Ferrer has maintained that the Bangsamoro peace agreement is constitutional and does not create a substate.

“If you see the roadmap, it follows the regular legislative process. A new organic act for the Bangsamoro will be crafted – a process precisely contemplated in the Constitution. And the President has made it clear – we should do this without the need for constitutional change,” Ferrer said.

Santiago’s criticism came nearly a week after the historic signing of the Comprehensive Agreement on the Bangsamoro, a region with wider political and economic powers that will replace the Autonomous Region in Muslim Mindanao (ARMM).

The next step in the peace process is the submission to Congress of the proposed Bangsamoro Basic Law, a measure that will formally create the autonomous political entity.

Presidential Spokesperson Edwin Lacierda also reiterated that President Benigno Aquino III instructed the negotiating panel to ensure that the Bangsamoro deal abides by the Constitution. He said it can withstand judicial scrutiny.

Lacierda said the peace panel will not just meet with Santiago but also with other lawmakers to explain to them the contents of the agreement.

“We will do [this] with all the legislators because this bill, which is now in the process of being finalized, will be submitted to Congress for their legislation enactment,” Lacierda said in a press briefing in Malacañang on Friday.

Lacierda admitted that Santiago and other lawmakers critical of the deal might hinder the passage of the basic law.

“I think everybody who has concerns will be able [to do that]. The legislative discussion will be the ground for discussing all these issues. And we have said, time and again, that the panel as well as the legislators who are in support, will discuss these issues at hand,” he said.

Senator Aquino even said Friday that the signing of the agreement will create more opportunities for the youth in Mindanao to have education and jobs.

“With new businesses and investments expected to put up shop in Mindanao, our young workers will have the chance to put their skills and knowledge to good use,” Senator Aquino said.

Drilon already said that the Senate and the House committed to pass the bill by the end of 2014 to pave the way for a referendum in 2015.

Yet Deputy Senate Minority Leader Vicente “Tito” Sotto III held off on expressing support for the measure, saying the bloc of Senator Juan Ponce Enrile will have to first scrutinize the bill. – Rappler.com

Read the Comprehensive Agreement on the Bangsamoro: