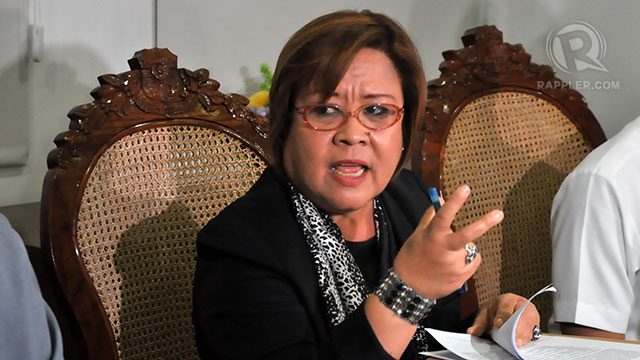 (That’s just okay, because it was said in the affidavits of Benhur… those are really depositories of those funds being channeled through these Napoles NGOs, so it’s not just Mrs Napoles but also her children and certain staff, including Benhur.)

De Lima’s statement came after Luy’s camp hinted at filing “the necessary pleadings in court to assail the APO.”

With the APO in place, Luy is unable to use select assets in his name, including bank accounts and motor vehicles – until further notice.

The Manila RTC Branch 22 is hearing forfeiture proceedings on properties suspected to have been acquired using money from the illegal siphoning of lawmakers’ Priority Development Assistance Fund (PDAF).

In its build-up of the forfeiture cases before the court, the Anti-Money Laundering Council (AMLC) has been securing documents from the DOJ and the National Bureau of Investigation. The AMLC is the country’s financial intelligence unit.

Included also in the coverage of the APO are bank accounts, monetary instruments, motor vehicles, and real properties of alleged PDAF scam mastermind Janet Napoles, her non-governmental organizations (NGOs), a couple of her family members, and other suspects in the scam. (READ: Napoles family, ‘pork’ scam suspects can’t touch assets)

Lawyer Raji Mendoza, Luy’s legal counsel, said they still have “a remedy under the Rules on Civil Forfeiture to have the assets of our clients discharged.” Mendoza is also representing Luy’s brother Arthur and his mother Getrudes.

“Note that the purpose of the APO is merely to preserve the questioned assets while the main case for forfeiture is being heard… Again, we reiterate our position that Benhur et al assets were acquired legally and have no connection to the PDAF anomaly,” he said.

Mendoza also raised an earlier appeal to have Luy as state witness exempted from the assets freeze, since forfeiture proceedings were earlier tagged by the Supreme Court as ‘criminal’ in effect. (READ: Benhur Luy: Exempt me from assets freeze)

“Lastly, the court has yet to recognize our argument that pursuant to Benhur’s admission to the Witness Protection Program, he is entitled to the full benefits arising from his immunity from all criminal suits including the sought forfeiture, in relation to his testimony vis-a-vis the pork barrel scam,” Mendoza concluded.

AMLC going after others

De Lima also said she continues to urge the AMLC to work on the forfeiture of assets of other individuals suspected to have been recipients of kickbacks from the scam.

She added that the complete delivery of justice in relation to the scam should not “stop at the prosecution aspect” but also include the “recovery of assets.”

“These are public funds… In the end, dapat irecover yan (those [assets] should be recovered). That is really part of the integral process of exacting justice in anti-corruption cases such as this lalo na (especially) plunder,” she said.

The PDAF scam, an elaborate ploy to divert lawmakers’ PDAF to bogus projects by fake NGOs, was allegedly masterminded by Napoles.

Napoles’ NGOs served on paper as project implementors of the PDAF-funded projects.

The sham was exposed by Luy, who was rescued by agents of the National Bureau of Investigation in March 2013. He was allegedly illegally detained by his two cousins, Napoles and her brother Reynald Lim. – Rappler.com