Q and A: DOTC’s Abaya on truck, bus bans Hours of vehicle gridlock are commonplace, especially during rush hour. Officials expect traffic conditions to even worsen until 2016 because of a series of major road works and projects. Various solutions have been proposed – from reviving the Pasig River Ferry System, promoting the use of bikes in the metro, to improving the Philippine metro’s train system.

Two of Manila’s solutions to the traffic problem have been swift and controversial – a ban on buses without terminals in the city and a daytime ban on trucks. The truck ban, which began on February 24, has turned out to be a nightmare not only for truck groups and operators. (READ: Erap on truck ban: Nobody above the law)

The controversial ban also affected the Bureau of Customs, the Metropolitan Manila Development Authority, and eventually, the Department of Transportation and Communications itself (DOTC). (READ: Manila truck ban may affect PH exports)

Is it worth it? DOTC Secretary Joseph Emilio “Jun” Abaya weighs in:

Do bus or truck bans – for instance the ones imposed by the city of Manila – work?

How do you define “work”?

The goal is to alleviate traffic in the city.

If that’s your definition [of] if it “works,” yes. [On] the ban… I’ve heard people say lumuwang ang traffic sa [traffic has eased in] Manila. But does that have consequences? Yes. Traffic – movement of people– is a very sophisticated and complicated process. 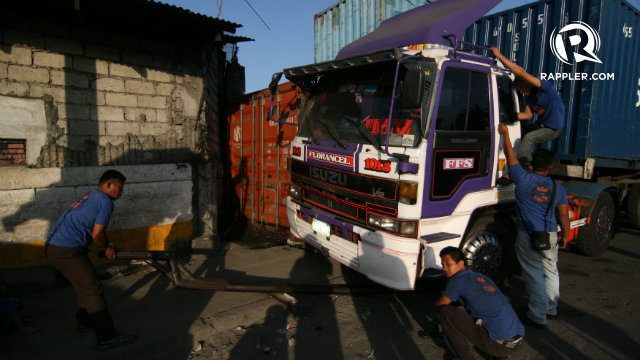 [It was] a natural consequence of something not coordinated or carefully studied. Because you could imagine…it’s also a complicated movement for the truckers. In and out of the ports, bringing in full containers and empty containers.

And you have Customs procedures to think about.

Yes, Customs, banks,…the importers. So because of the ban, no choice, they adjust. One aspect, they carry a full container into the warehouse around 10 pm. They wait for 10 hours in the dark, subject to security risks until it opened.

Ang ano nila diyan [Their take on that is], we’re exposed to this, we have downtime. We pay the driver, the truck is there….Okay, I’ll just charge you [warehouse operator or the exporter] higher trucking fees.

Now I got a text from [Department of Trade and Industry] Secretary Gregory Domingo questioning why are trucking fees 50% higher. They’re merely passing on the cost of operations. And they’re asking if it’s regulated. No, trucking fees are not regulated.

So, philosophically…they have to put in their share. They have to operate in the evening, further passing that on to importers and exporters and it may translate into the [higher] price of goods.

Now the question is: if you buy canned goods at 50%, hypothetically, whatever percent…is that worth it for a decongested Metro Manila? If you say, “Yeah, sure, we’re willing to pay sardines at a higher cost basta walang [as long as there’s no] traffic in Metro Manila,”…[then] government has done its job.

‘Pag hindi [If not], we gotta bring in some congestion again. So it’s really a very complex, linked processes. I just see it as everyone putting in their share for decongestion. Even your sardine buyer has to put in his share.

But LGUs can and will say they have the autonomy.

Well, legally…it’s something we just haven’t gotten to the courts but the question is: Can an LGU amend a national franchise? We’re comfortable that we can assert that. They just have this provision in the Local Government Code that mentions “streets.” Is there a difference between streets and national roads? Hindi lang nasusubukan [It just hasn’t been tested] but government would want to assert it; we’ll have another case.

Manila seems to be pushing it with the policies they’re implementing – such as the bus and truck bans. City officials plan to be stricter with other forms of transportation like jeepneys and the UV Express. Moving forward, how do we prevent situations such as the truck ban na parang nagkagulo-gulo [that seems to have caused chaos]?

Yes, we’re being very strict now. In fact, just to share with you: there’s an old department order from the ’90s or the 2000s about the modernization of the PUVs. That is strictly being enforced now – age limits to taxis, buses, UVs. We have tasked the LTFRB to put an age limit to trucks because apparently they’re getting away with it. Of course the king of the road doesn’t have an age limit. Sabi ko [I said]…that should be down the road.

We’ve been very strict with that, in fact people have been crying and asking us to allow a grace period. But no, for a year now we haven’t been budging. They previously went around the law by taking the LTO road worthiness test because once you get that, you get exempted. But no – no more road worthiness test to circumnavigate the 15-year ban.

Doon sa [On the] truck ban, I think there should really be coordination. Unfortunately, unlike the big cities of Mexico or Seoul – same population as Metro Manila – but one mayor, he decides. Dito [Here], you have little kingdoms with little kings.

And you have to deal with every single one of them?

Every king thinks he’s the king of the world so that makes it more challenging; it requires a lot more coordination, a lot of adjustments. But one thing positive about the Manila truck ban, we’re forced to really look at solutions and it forced importers and exporters to look into diverting traffic to Batangas and Subic – which is good policy. It’s been policy of government even before Manila’s truck ban. – Rappler.com