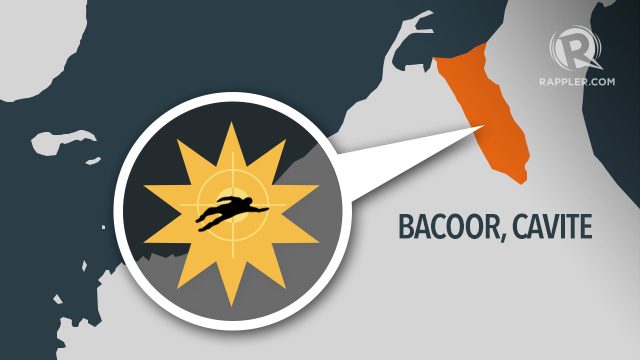 MANILA, Philippines – Media organizations and government officials condemned the killing of a reporter based in Cavite, while the police chief of a town in the same province has been relieved since being considered a suspect in the case.

Rubylita Garcia, 52,  a reporter for Remate and a block timer of dwAD radio station in Cavite, was shot dead inside her home by unidentified men in Bacoor City, Cavite, on Sunday, April 6. She was the first female journalist to be killed in the country in 2014 and the 22nd media practioner to be killed under the administration of President Benigno Aquino III.

Reports said unidentified men barged into her home in Barangay Talaba at around 10:15 am Sunday and shot her in full view of her son and 10-year-old granddaughter.

The suspects did not cover their faces as they escaped on board a motorcycle, according to reports.

Garcia was rushed to the nearby Saint Dominic Hospital but died past 3 pm Sunday after sustaining multiple gunshot wounds.

The Philippine National Police (PNP) has activated a special task force to investigate the case.

On Monday, police released a cartographic sketch of the suspect based on the descriptions of a lone eyewitness.

One of the suspected gunmen was described to be male, about 30 years old, 6 feet in height, of medium built, have fair complexion and tattoo in the arms, Police Senior Superintendent Joselito Esquivel Jr said in a statement. Police officer behind the killing?

Police Superintendent Conrado Villanueva, the chief of police of Tanza town, has been temporarily relieved from his position after allegedly being implicated in the incident by Garcia herself before she died.

Remate reported Sunday that before Garcia passed on, she told her children that Villanueva ordered the killing.

“This is administrative relief because of reports the Tanza police chief figured in an altercation with the victim before the incident,” said PNP spokesman Chief Superintendent Reuben Sindac.

The altercation between the pair was allegedly a heated verbal argument at a press conference, according to Remate publisher Benny Antiporda, although the details were not immediately clear.

“She was a hard-hitting veteran news reporters, always going after perceived corruption and anomalies wherever she was assigned,” Antiporda told Agence France-Presse.

However, Sindac emphasized this did not necessarily mean Villanueva was a suspect.

Esquivel has ordered the administrative relief of Villanueva pending the investigation, the PNP said in a statement. Cavite Deputy Provincial Director Police Superintendent Joseph Javier was appointed as his temporary replacement.

In an interview with the watchdog Center for Media Freedom and Responsibility Monday, April 7, Villanueva denied knowing Garcia. The police officer said he only met Garcia once at the Tanza police station, where they had an argument.

The Quezon chapter of the National Union of Journalists of the Philippines (NUJP) condemned the incident.

NUJP slammed the administration of President Benigno Aquino III and the culture of impunity that continues to persist in the country.

“It is all too clear to us that the President’s promises are meaningless. He is just as guilty as those who gave the orders to kill and those who pulled the trigger,” NUJP said. “Any unresolved attack or killing of journalists deepens the culture of impunity that leads to more violence against media workers.”

The International Federation of Journalists, an affiliate of NUJP, also scored the “ongoing failure” of the government to solve media killings, which it said “perpetuates a cycle of death for media workers.”

“With impunity for journalist murders now a major priority for the United Nations, the Aquino government is guilty by its own inaction. In the global arena, it can no longer continue to foster this rampant abuse of human rights by its own failures to act,” IFJ said.

For its part, Malacañang gave assurances that authorities will pursue the incident.

“We extend our condolences to the family of the late Rubylita Garcia and we promise that we will pursue this heinous death. As we have said, tracker teams are already in place to look for the suspect,” presidential spokesperson Edwin Lacierda said in a Malacañang briefing.

“I condemn those responsible for the death of Rubilita Garcia. I expect our authorities will leave no stone unturned in their search for her killers,” he said. “Such killings have no place in a democratic country like ours,” he added.

Senator Grace Poe appealed to authorities to solve the incident as soon as possible.

“I strongly condemn the senseless, heinous murder of fearless journalist Ruby Garcia and the ignominy of gunning her down at her home and in full view of her granddaughter,” Poe said.

The Philippines is the third worst country for journalists in 2013, a report by the London-based International News Safety Institute said. – Rappler.com