“It is absurd that the Aquino administration is saying that it wants peace but it is rampantly violating agreements that would ensure the progress and fast tracking of the peace negotiations,” said Bayan Muna Representative Carlos Zarate in a statement released Monday, April 7.

Late March, the Tiamzons and 5 others were arrested in Cebu and served warrants for crimes against humanity. Military and police say the Tiamzons are top leaders of the Communist Party of the Philippines, but the two say they are national consultants of the NDFP.

In the statement, the two incumbent representatives of Bayan Muna criticized the government’s arrest of “at least 12 Jasig holders.” (READ: ‘Jasig has become a bounty list‘)

“They are killing and arresting those that are involved in the talks so how can peace be discussed,” said Zarate.

On Monday, Ocampo, who also celebrated his 75th birthday, told the Tiamzons about his own experience while in jail. 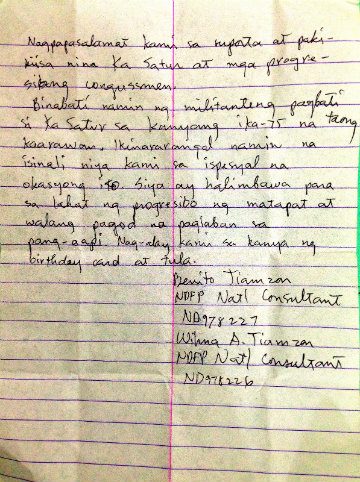 (We are honored to be part of this special occasion. Progressives should look up to Ocampo as an example of someone who serves honestly and selflessly.)

Ocampo also pushed for the release of the Tiamzons and other suspected CPP members. “For the peace talks between the two parties to go full swing it would be best if the Aquino administration releases all the Jasig holders,” said Ocampo in a statement.

The government, however, said the Tiamzons’ arrest was legal since peace negotiations with the communist group ended in December 2013. The CPP itself said they were giving up on the administration of President Benigno Aquino III, adding that “it has no choice but to wait for the next regime to engage in serious negotiations.” – Rappler.com