May 16, 2012 8:57 PM PHT
Natashya Gutierrez
Facebook Twitter Copy URL
Copied
The complainants said what the defense wanted to prove since the beginning: the AMLC report was based on unverified complaints 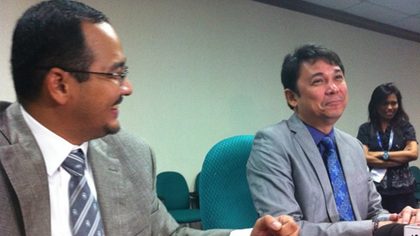 MANILA, Philippines – At the end of Day 39 of the impeachment trial of Chief Justice Renato Corona, his counsels were happy that the hostile witnesses they presented admitted they did not verify the complaints they submitted to the Ombudsman.

Yet these became the basis of an investigation accusing the Chief Justice of having at least $12-million in “fresh deposits” or money that did not move or transfer accounts.

Civil society leader Harvey Keh of Kaya Natin and lawyer Manuel Santos told the court they had no personal knowledge of Corona’s dollar accounts which became the basis of their complaints.

Keh said he approached the Ombudsman based on documents delivered anonymously to his office, while Santos said his complaint was based on news stories.

Akbayan party list Rep Risa Hontiveros, another complainant, testified she never mentioned the $10-million allegedly owned by Corona. This was the amount which Ombudsman Conchita Carpio-Morales asked the Chief Justice to explain in the letter she addressed to him.

Corona’s lawyers presented the 3 witnesses to cast doubt on the Anti-Money Laundering Council’s (AMLC) report that Morales showed the court Monday, May 14.

The report was the focus of her supposedly “bombshell” testimony, which revealed that Corona had 82 dollar accounts.

Senator-judges lashed out at Keh, who delivered the anonymous documents left in his office to Presiding Officer Juan Ponce Enrile’s office without verifying them.

The documents pertained to alleged bank records owned by Corona.

Keh was scolded by senator-judges for turning to the media to expose unverified documents, which, in turn, negatively portrayed Corona and unfairly conditioned the mind of the public.

“A person governed by ethics would not do the things you have done,” senator-judge Miriam Defensor-Santiago told Keh.

Enrile directed Keh to submit to the court an explanation why he should not be held in contempt for his actions.

Corona’s lawyers welcomed the testimonies of the complainants saying it was what they had wanted to prove since the beginning — that the AMLC report was based on unverified complaints.

They also said they preferred to present the complainants before the Ombudsman, which would have given the public a different perception.

He also attacked the witnesses for their decision to file a complaint based on unauthenticated documents.

The prosecution on the other hand shrugged off the testimonies, saying they did nothing for the case at hand.

“There’s no relevance at all,” said prosecution spokesperson Erin Tañada. “Dahil kung pag-uusapan natin ang statements of assets, liabilities and net worth, dapat yung hinaharap nilang testigo ay yung magpapatunay na ang nilagay po ng ating Punong Maestro mula 2002 hanggang 2012 ay makatotohanan at accurate.” (Because if what we’re talking about is the SALN, then the witnesses they should be presenting are those who can prove that the entries of the Chief Justice from 2002 to 2012 are truthful and accurate.)

In discrediting the complainants, defense counsel Dennis Manalo said the assets Corona allegedly did not disclose are “grossly exaggerated, unreliable, fabricated, or at the very least, comes from an illegal source.”

Senator-judge Franklin Drilon took the stand to question Manalo’s statement, pointing out that some of the foreign accounts included in AMLC’s report were Corona’s PSBank accounts already verified by bank president Pascual Garcia III in an earlier testimony.

Senator-judge Alan Peter Cayetano also emphasized there is a significant difference between the report being unverified, and the report being inaccurate — as the accounts on the list that do exist still need to be explained.

Corona’s lawyers compared the AMLC list to a previous one also provided by a government agency — the Land Registration Authority (LRA).

Earlier in the trial, a list from the LRA compiled 45 properties supposedly owned by Corona. The list was unverified and upon closer investigation, included properties not under Corona’s name or no longer his.

The defense said only 5 of the properties on the list were the chief magistrate’s — all of which he declared on his SALNs, albeit belatedly.

Defense counsel Judd Roy said the AMLC’s list of bank accounts is “exactly” like the “45 properties” list which has some real accounts, but mostly fake accounts.

It will be up to Corona, who will testify on Tuesday, May 22, to explain these foreign accounts and ultimately explain to the court why they are not declared in his SALNs.

Defense lawyers have said Corona is not legally obliged to include the dollar accounts in his SALN, as foreign accounts cannot be examined and therefore need not be declared. – Rappler.com