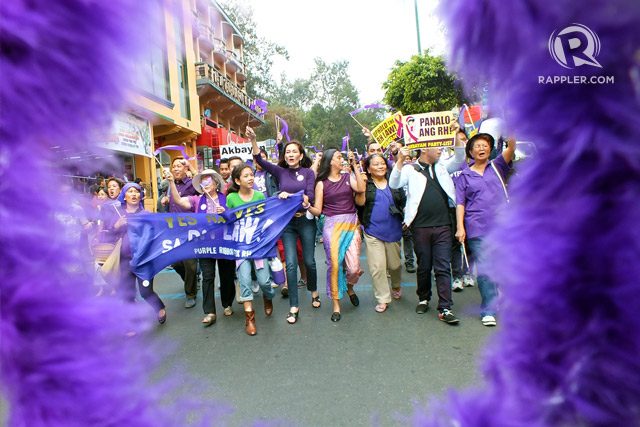 Facebook Twitter Copy URL
Copied
(UPDATED) Reproductive health advocates hail the 'big victory' for women and young people, and say they are ready for the next battle: to ensure its implementation

MANILA, Philippines (UPDATED) – It was a happy day for the so-called purple crowd, supporters of the controversial reproductive health (RH) law.

Despite this, health advocates still consider the court decision “a big victory” for the Filipino people, especially for women and young people.

“We are happy that the constitutionality of RH law was upheld, as it sided with the youth and women,” National Youth Commission (NYC) Chairman Leon Flores III told Rappler in a phone interview.

“I was just talking with some of our women from the communities…when they learned the implications, someone cried,” Angsioco told Rappler in a phone interview.

For Angsioco, the lifting of the status quo ante order against the implementation of the RH law is also a big victory in addressing poverty in the country. (READ: Without RH law, contraceptives will run out in Payatas)

The Department of Health (DOH) said in a statement that they respect the decision of the SC in striking down some provisions of the law.

DOH also said it is prepared to implement the remaining provisions declared constitutional, but proper implementation can only happen with everyone’s help, “whether pro- or anti-RH.”

The Commission on Human Rights (CHR) said it was pleased by the Court’s decision which will now provide comprehensive education on gender sensitivity and women empowerment.

It will “protect women and girls from exploitation as well as orientate the public on equal respect for people with diverse sexual orientation,” the CHR said in a statement Wednesday, April 9. 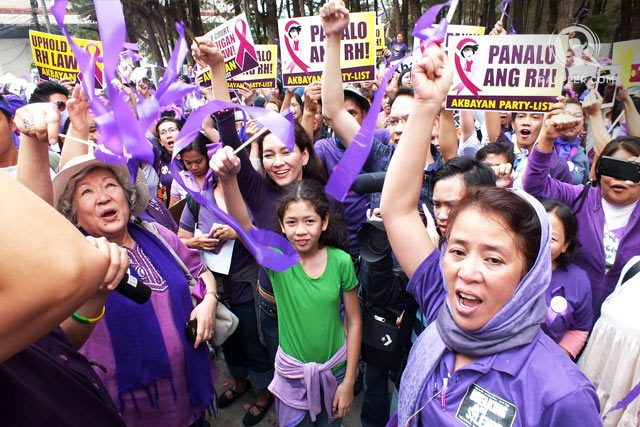 Akbayan’s Risa Hontiveros called the decision “a historic triumph of reason over dogma.”

The former party-list representative added, “It is a remarkable advance against ignorance and inequality, and a clear victory against bigotry and conservatism.”

She also praised President Benigno Aquino III for his commitment to pass the law under his term.

The Purple Ribbon for RH Movement, meanwhile, thanked the High Court in a statement Tuesday for giving “justice to years of struggle for the law and recognizing the contribution of everyone who fought hard to have this law.”

They said this is a manifestation of the court’s “respect for the will of the majority.”

“Announcement at Supreme Court Compound in #BaguioCity: The #RHLaw is NOT unconstitutional. The house has been built. Congratulations Filipinos,” he said in a separate post.

While there is much rejoicing in the pro-RH side, they acknowledge the real work has only begun.

NYC’s Flores said the country will have much catching up to do to meet the 5th Millenium Development Goal on maternal health.

But with Tuesday’s decision, he said they can now focus on programs and interventions in cases of teenage pregnancy and the increasing rate of HIV/AIDS in the country.

Angsioco, meanwhile, said that while the fight is not yet over, they are energized and “ready for this.”

Philippine NGO Council for Health, Population and Development head Eden Datinguinoo noted the importance of monitoring the executive department’s implementation of the law.

In a text to Rappler, Likhaan director and co-founder Junice Melgar said the decision means the SC’s reaffirmation of the social justice content of the law. (READ: In Manila, women demand long-term birth control)

“Unfortunately, we cannot resurrect the women and their babies who have died. But we can make sure that this unnecessary and inhumane tragedy will be prevented from happening starting today,” she added.

After the announcement, RH supporters present in Baguio – where the decision was announced – held a triumphant parade, chanting to the tunes of the traditional saligum-ay chant of the Cordillerans, and folk song Si Filemon.

Are you pro-RH? What are your thoughts about the SC decision? Tell us in the comments section below. – Rappler.com