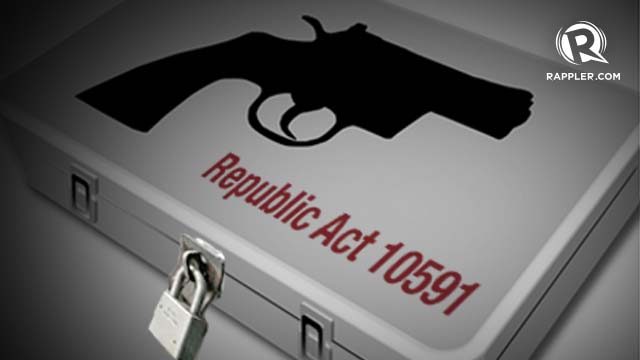 Speaking to reporters in Baguio City, SC spokesman Theodore Te said the TRO is effective immediately and “until further orders.”

Prior to the TRO, applicants were required to visit the PNP headquarters in Camp Crame, Quezon City – one of the main points cited by the petitioners in their case before the Supreme Court, questioning the constitutionality of RA 10591.

With the TRO, the SC said the PNP should “continue to accept, process, and approve licensing and renewals thereof in all PNP regional offices.”

In March, Chief PNP Director General Alan Purisima ordered the shutdown of the satellite offices of the PNP Civil Security Group (CSG) to centralize firearms license procedures, as provided by the law. The PNP chief had earlier said that anomalies abound in the satellite offices.

No courier services, sections struck down

The TRO also bars the PNP from tapping “any courier services for deliveries of approved firearms, license cards,” another major point raised by the petitioners against the law.

Gun owners and re-applicants have been critical of the PNP’s courier of choice in the past – Werfast Documentation Agency – because deliveries were either late or non-existent.

Werfast ended its deal with the PNP as its official courier service after it was revealed that the company was owned by Purisima’s former superior in the PNP CSG.

The SC also stopped the PNP from enforcing Section 9 of RA 10591and Rule 3, Section 9 of the Implementing Rules and Regulations (IRR).

Under Section 9 of RA 10591, gun owners with Types 3 to 5 licenses “must comply with the inspection and bond requirements” as dictated by the PNP.

Under the IRR, gun license owners “must comply with the inspection requirements of the PNP.” Failure to do so would be ground for the cancellation of license and/or registration.

Type 3 licenses allow citizens to own a maximum of 10 firearms and Type 4 licenses, ownership of up to 15 firearms. Type 5 licenses are given to certified gun collectors, allowing them to own more than 15 firearms.

Te said the PNP has been asked to comment on the petition questioning the legality of provisions in the law and the IRR that allow the PNP to inspect the homes of Types 3 to 5 license owners.

The Peaceful Responsible Owners of Guns (PROGUN), a petitioner in the case, earlier said that “the compulsion of gun license applicants for registration to sign ‘waivers and consent’ for the police to enter into their homes and dwelling places as being a violation of Article 3 Section 2 of the Constitution against unlawful searches and seizures.”

President Benigno Aquino III, a known gun enthusiast, signed the comprehensive gun law in June last year. The measure is supposed to improve the standards and prerequisites to acquire a gun license.

In March, gun enthusiasts questioned before the SC the legality of some of the provisions of RA 10591. Gun groups have been critical of the law since the start of its enforcement in 2014, saying it was punishing responsible gun owners unnecessarily. – Rappler.com