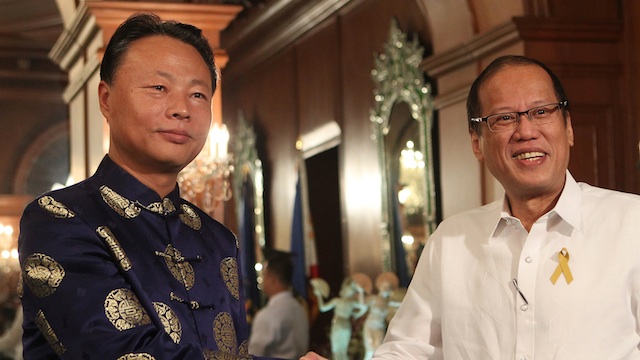 MANILA, Philippines – Chinese Ambassador to the Philippines Zhao Jianhua presented his credentials to President Benigno Aquino III in a meeting described by the Palace as “very cordial.”

On Tuesday, April 8, Aquino received the credentials of 6 resident ambassadors-designate to the Philippines including Zhao’s. Zhao, like his predecessor, Ma Keqing, is expected to address several issues involving his country’s dispute with the Philippines over the West Philippine Sea (South China Sea).

“On the matter of the presentation of the credentials of the new ambassador from the People’s Republic of China, I’m told that the atmosphere was very cordial during the 15 minutes that the President had conversed with the new ambassador, and that both sides agreed that the maritime dispute in the West Philippine Sea is not the totality of our relationship with our neighbor,” she said.

Valte said both sides reaffirmed their commitment to continue bilateral cooperation in “other facets of our relationships, particularly on trade, tourism, transnational crimes, among others.”

She said Aquino also thanked China for their support during Super Typhoon Yolanda (Haiyan), and extended an invitation to its leaders to attend the World Economic Forum that the Philippines is hosting in May.

The embassy also said the “current difficulties” in the two countries’ relations “are not what the Chinese side wishes to see, and are not in the common interests of both China and the Philippines.”

“It is China’s hope that the Philippine side could, in the spirit of seeking common grounds while shelving differences, work with the Chinese side to properly handle relevant disputes, and to overcome obstacles and bring the bilateral ties back to the normal track of development,” the Chinese embassy said.

The meeting happened amid a maritime dispute between China and the Philippines. Zhao arrived in Manila nearly a month before the March 30 deadline for the Philippines’ written pleading in its case against China before an arbitral tribunal at the Permanent Court of Arbitration.

The written pleading, called a memorial, was submitted by the Philippines on March 30 to end decades of alleged bullying by Beijing. China rejected the memorial, arguing that the arbitral tribunal at the Permanent Court of Arbitration has no right to hear the case.

Only after presenting their credentials can ambassadors actively begin their work in Manila.– with reports from Natashya Gutierrez and Paterno Esmaquel II/Rappler.com