US to train PH troops on maritime surveillance 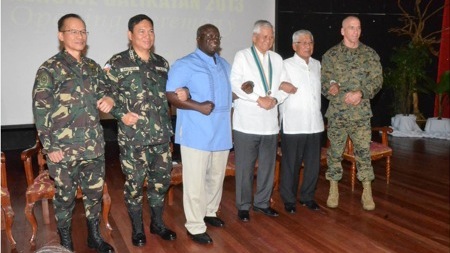 MANILA, Philippines – The annual Balikatan exercises between the Philippines and the US will run next month, May 5-16, in various military camps nationwide.

At least 3,000 Philippine troops will train with 2,500 US troops on humanitarian assistance and disaster response (HADR), maritime surveillance, and civil military operations (CMO), among others.

US troops will demonstrate how to use maritime surveillance equipment at the Naval Education Training Center (NETC) in Zambales, the province where the disputed Panatag Shoal (Scarborough Shoal) is attached.

Panatag Shoal, a rocky sandbar located within the country’s Exclusive Economic Zone (EEZ),  is practically occupied by Chinese Coast guard ships that keep Zambales fishermen from fishing in the area.

The standoff between Philippine and Chinese civilian ships at Panatag Shoal in 2012 strained relations between the two countries, and led to indirect sanctions by China, including restrictions on the entry of Philippine bananas to China which threatened the local banana industry for several months.

US military officials have made pronouncements that the Philippines should improve its maritime domain awareness or its capability to monitor the disputed seas.

Lieutenant Junior Grade Annaleah Cazcarro, co-director of the Combined Joint Information Bureau of the PH-US Balikatan Exercise 2014, downplayed any possible connection between the exercises and the ongoing tension between the Philippines and China in the West Philippines Sea (South China Sea).

“The Balikatan exercises  is a long-standing relationship between the US and the Armed Forces of the Philippines. It strengthens our relationship,” she said.

Cazcarro also said that the sessions are yet to be finalized.

Aside from NETC, the other training exercises will be held in Camp O’Donnel in Tarlac City, particularly at its Crow Valley Range Complex which will be the venue of live fire exercises.

Other venues are in Fort Magsaysay in Nueva Ecija, Clark Air Base in Pampanga, and the Western Command in Palawan, among others.

Cazcarro said exercises in Palawan will concentrate on HADR. Similar disaster response exercises will be held in typhoon-prone Legazpi City in Albay and Tacloban City in Leyte.

The Philippines and the US are also finalizing a military-to-military agreement to increase the presence of US troops in the country and allow them more access to Philippine military bases.

The help extended by the US military in areas destroyed by Super Typhoon Yolanda last year showed the advantages of the presence of US troops and assets in the Philippines.  (READ: Soldiers of the world deployed for Haiyan victims)

But allowing the US to construct facilities here has raised concerns despite repeated assurances from US and Philippines officials that no permanent US bases would be built in the country, as provided by the Philippine Constitution.  – Rappler.com