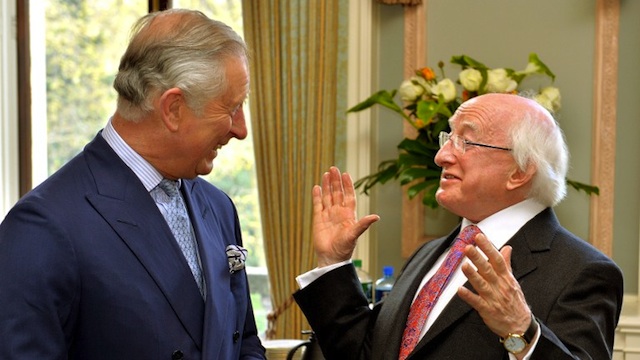 LONDON, United Kingdom – Queen Elizabeth II welcomed the Irish president to Britain on Tuesday, April 8 for the first time since the republic became independent, in a historic state visit consolidating ties between the once hostile neighbors.

The 4-day trip by President Michael D. Higgins follows the queen’s groundbreaking visit to Ireland in 2011, which helped put British-Irish relations on a new footing.

One of the highlights will be a royal banquet at Windsor Castle on Tuesday evening attended by Northern Ireland Deputy First Minister Martin McGuinness, a former IRA commander.

Before leaving Ireland, Higgins said the challenge was not to “wipe the slate clean” of all the distrust and difficulties of the past, but to look to the future.

“We are at a very interesting point in history, when we have, following Her Majesty’s visit to Ireland, such good relations between our people,” the president said.

“My hope for the visit, at the end of it all, is that people will, in ever more numbers, come to share in experiencing the history, the present circumstances and culture.”

He added: “The challenge is to hand to a future generation all of the prospects of the future. You are not inviting them to an amnesia about any deep dispute.”
‘Journey toward reconciliation’
The president was greeted in London by Prince Charles, the heir to the throne, followed by a ceremonial welcome by the 87-year-old queen and her husband Prince Philip at Windsor Castle, west of London.

Higgins, 72, was also due to address lawmakers at the Houses of Parliament, before returning to Windsor for the banquet.

It would once have been unthinkable for McGuinness to attend such an event, although the Sinn Fein politician has already met the queen. The pair shook hands in a highly symbolic moment in Belfast in June 2012.

As a commander of the Irish Republican Army (IRA), McGuinness had a prominent role in the bloody battle for Northern Ireland to be part of the Republic of Ireland to the south.

The province remained part of the United Kingdom when Ireland gained independence in 1922, and was a source of huge tension between Dublin and London.

The violence was largely ended by the 1998 Good Friday peace accords, which paved the way for a power-sharing government in Belfast, but only after an estimated 3,500 people died.

Relations have steadily improved between Britain and Ireland since then, although an exchange of state visits would have been impossible even at the turn of the millennium.

For some, the pace of change is too rapid.

Stephen Gault, whose father was killed by an IRA bomb in 1987, said the presence of McGuinness at Windsor was “another nail in the coffin of the innocent victims”.

“If Sinn Fein/IRA want peace, why don’t they come forward now and tell the authorities who was responsible for these heinous crimes in the past,” he told BBC radio.

However, Conor Murphy, a Sinn Fein lawmaker, said McGuinness’s invitation to the banquet was “another step on that journey toward reconciliation and better relationships”.

The state visit has reignited a debate about how to deal with Northern Ireland’s violent past, including over whether there should be amnesties for crimes committed before 1998, both by paramilitaries and British security forces.

Issues such as community parades and the flying of the British flag also remain highly contentious, and an attempt last year by former US diplomat Richard Haass to reach an agreement failed. – Rappler.com