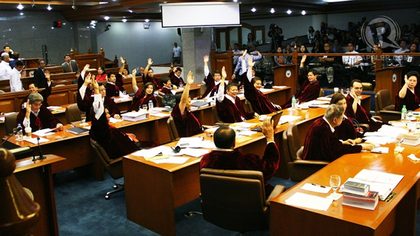 MANILA, Philippines – Chief Justice Renato Corona’s much-awaited testimony is scheduled on Tuesday yet, but some senators are already predicting what he will say on the witness stand.

Sen Francis Pangilinan said he expects Corona to attack the credibility of the evidence and information presented against him.

In a text message to Rappler, Pangilinan said Corona’s lawyers hinted at the topic of their client’s testimony during the trial on Wednesday, May 16.

“It appears that the lawyers of the Chief Justice gave us a preview of his defense…when they said that the evidence thus far presented in their view is fabricated, grossly exaggerated, unreliable, or at the very least comes from an illegal source and that on this basis he should be acquitted.”

Pangilinan said, “This, I believe, may very well be the central theme of his testimony should he testify on Tuesday.”

On Wednesday, Corona’s lawyers presented complainants who filed petitions against Corona before the Office of the Ombudsman.

Defense counsel Dennis Manalo said their testimonies prove that there is a “well-planned and orchestrated effort” to discredit the chief magistrate.

Corona will testify on Tuesday, May 22, when the impeachment trial resumes after a continuance requested by the defense.

Sen Franklin Drilon, however, said Corona’s defense should not stop at casting doubt on the authenticity of the report of the Anti-Money Laundering Council (AMLC).

Ombudsman Conchita Carpio-Morales testified that Corona has $12-M in fresh deposits or money that did not move in his bank accounts. Morales also said Corona has 82 dollar accounts in 5 banks.

Morales’s report was based on data from the AMLC. The defense is questioning the authenticity of the AMLC report.

In an interview on ANC, the ABS-CBN News Channel, Drilon said that the data on the AMLC report match the bank account numbers earlier presented by Philippine Savings Bank President Pascual Garcia III.

“I could not verify as to the truthfulness [of the report]. What I can verify through the records are the PSBank dollar account numbers. This is admitted,” said Drilon.

The senator added, “How much is the account, we do not know because of the [temporary restraining order] issued by the Supreme Court, but if you look at this AMLC report, you can find the same account numbers and account name Renato Coronado Corona.”

In an interview with radio DZRH, Cayetano said he asked his staff to see if data in the Ombudsman’s report are similar to those in Corona’s bank records.

“For example, I am asking them to check because at one point in time, there was a withdrawal of $500,000 so I’m sure, at the very least, that there is $500,000. The defense cannot say that is just a transaction,” Cayetano said in Filipino.

The senator said, “Yes, we should not take the report hook, line and sinker but we need to take it in good faith.” – Rappler.com