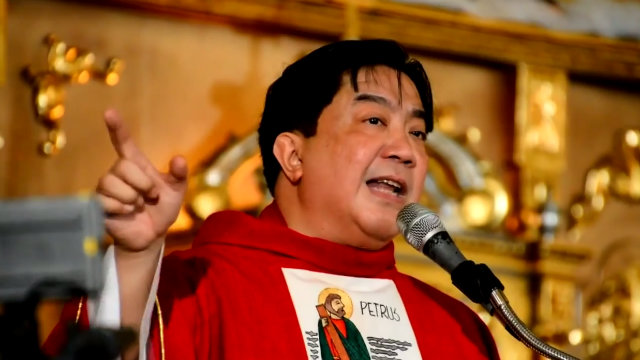 MANILA, Philippines – This Holy Week, some parishioners of the Santo Niño Parish in Bago Bantay, Quezon City, want their own priest to atone for his own deadly sin of greed.

Father Enrique Aloysius Aliño is facing a complaint for 14 counts of qualified theft before the Quezon City Prosecutor’s Office. He allegedly misused more than P1.7 million of the Parish Pastoral Council (PPC) funds.

He has denied the allegations, but his parishioners have documented more cases of the priest’s unexplained wealth such as several real estate properties and vehicles.

Instead of answering allegations, the cleric “is creating division, sowing intrigues and forcing others to lose their faith in the Church hierarchy,” said Del Mabait Sin of the Bago Bantay Movement for Justice and Peace (BBMJP). Parishioners who are disgruntled and dismayed with Aliño’s continued stay in the parish started the movement.

They have called the attention of Aliño’s superiors – Cubao Bishop Honesto Ongtioco and Manila Archbishop Luis Antonio Cardinal Tagle – to no avail. They have gone to the Nunciature, the official residence of the Pope’s envoy to the Philippines, but were simply advised to report the matter to Pope Francis.

Now, they’re preparing to tell the Pope all they know.

“Do not underestimate our resolve. Do not mistake our humility for weakness. We are prepared to pursue our ends…just like the brave parishioners of Limburg, Germany,” the parishioners said in a letter to Ongtioco in November 2013.

They were referring to the case of Limburg Bishop Franz-Peter Tebartz van Elst, who scandalized his congregation with an extravagant renovation of his residence and church buildings. The scandal prompted the bishop to resign.

Rappler sought to get in touch Aliño through his mobile phone number and his parish office. Requests for return calls were ignored.

Once a peaceful community of the faithful, the Santo Niño Parish is now divided into 3 factions: those who want Aliño out, those who support him, and those who try to remain neutral.

The first group consists of former PPC officials who were removed by Aliño shortly after they started questioning how he had been handling the parish and the PPC funds. Aliño took over the parish in 2012.

Outgoing parish priest Father Glenn Orocio turned over to Aliño P1.06 million for safekeeping. It was an amount that the PPC raised from a raffle drive in 2012. Orocio also turned over to him the PPC funds amounting to P761,183 at the time. The money was supposed to be used to build a baptistery and to renovate the Adoration Chapel and confessionals.

In a complaint affidavit submitted to the Quezon City Prosecutor’s Office, however, former PPC official Alfredo Ramos said Aliño deposited the money in a parish fund-cum-personal account without getting the consent of the PPC.

PPC members found that Aliño used portions of the transferred money to pay for electricity bills and to refurbish the church altar when these were not part of PPC projects.

When the former PPC officials found this out, they dug into other financial transactions and found a pattern of anomaly. They requested an audience with Aliño to hear his explanation.

While the confrontation was belligerent, both parties agreed to resolve the issues. The priest drew first blood, however, by condemning the complaining PPC officials during his homily in one mass.

Realizing that the lines of communication had been severed, the PPC members sent a letter to Ongtioco, requesting him to intervene. By this time, Aliño had been regularly using the pulpit to insult other PPC members.

In their meeting with Ongtioco’s representative, it was agreed that the Diocese of Cubao would conduct a financial audit on Santo Niño Parish. The diocese cleared Aliño of anomalies, but the vicar general, Monsignor Dan Sta. Maria, supposedly told the PPC officers  that  Aliño admitted before Ongtioco that he indeed juggled the funds and that he had gotten reprimanded.

Dissatisfied with the result of the audit, the PPC officers asked Ongtioco to dig deeper into Aliño’s financial transactions. They also complained that the priest had been fostering a “hate atmosphere” by calling them names during his homilies. The bishop was in no mood to listen further.

The parishioners then sent letters to Papal Nuncio Guiseppe Pinto, Tagle, and Catholic Bishops’ Conference of the Philippines president Archbishop Socrates Villegas. During this time, the former PPC officials formed the BBBMJP “to fight against the corruption and pastoral mismanagement” of Aliño.

A last ditch effort to meet with Ongtioco was scuttled when the bishop cancelled at the last minute. By this time,  PPC officials had been gathering evidence against Aliño for his alleged hidden wealth.

In a Nov 8, 2013, letter to Ongtioco, the former PPC officers accused the priest of engaging in money-making activities and owning several condominium units and expensive vehicles, whose ownership they validated with the Land Transportation Office.

“If only he were a government employee, he can already be charged under the Anti-Graft and Corrupt Practices Act,” the parishioners told Ongtioco.

Citing the example of Pope Francis, the parishioners challenged the bishop to call Aliño’s attention on his lifestyle that was beyond his means as a priest. “If the Pope can be so humble, simple, and so sincere, can other bishops and priests live like kings and princes instead? If you answer yes, then you may be the simplest hypocrite in this side of town. If you answer no, then you do not obey the Pope’s own teaching and what will prevent us from not obeying you too given the lifestyle you lead?” the letter said.

Eleven months after they raised the issue against Aliño, the parishioners decided to bring the matter to court.

On Nov 26, 2013, acting on behalf of other former PPC officials, Ramos, who formerly headed the PPC planning committee, filed 14 counts of qualified theft against the priest in connection with the misuse PPC funds.

In his counter-affidavit, Aliño squarely denied that he financially gained from the PPC funds. He said the money was all disbursed for the parish’s operations. He cited the diocese’s audit findings that “no money is missing and every single centavo is accounted for.”

As head of the parish, Aliño said he had “all the authority, right, and power as to where and how the ‘parish goods’ are to be administered in the parish,” so long as it would benefit the parish and its parishioners.

He also said Ramos had no right to complain and the complaint against him was intended “to harass, intimidate and remove me as parish priest.”

Refuting Aliño’s defense, the parishioners struck back with more damaging statements against the priest.

In his reply to Aliño’s affidavit, Ramos cited instances and examples of Aliño’s hidden wealth, including two condominium units at the Manhattan Gateway in Cubao, Quezon City, where monthly payments amount to P109,000. The priest himself at one time sought the help of former PPC officials “in restructuring his payments” for his two condo units.

They also found out that the priest owned residential houses and lots in Bayan-bayanan, Concepcion, in Marikina City. This is where he supposedly keeps his collection of “religious artifacts and expensive ivory figures…[that] are banned under the worldwide protocol against possession, selling, and trading of ivory after 1980.”

The parishioners established Aliño’s ownership of the properties based on the tax declaration.

On top of his real estate properties, the priest also acquired a brand-new Hi-Ace Grandia just 6 months after his assignment in Santo Niño. He also has a Fortuner, a Nissan Patrol, and an Isuzu utility usually seen parked within the parish premises. When they checked with the LTO, they found the vehicles registered under “Enrique Aliño.”

The parishioners said they hope Pope Francis will hear their side, and deliver them from Aliño. – Rappler.com