Facebook’s Saverin to settle in Singapore 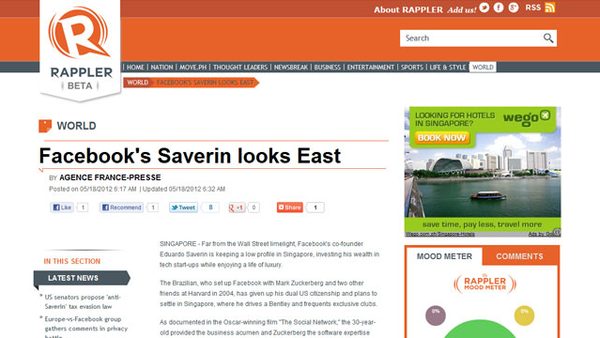 Eduardo Saverin, the 30-year-old Brazilian who set up Facebook with Mark Zuckerberg and two others in 2004, has given up his dual US citizenship and plans to settle in Singapore. The business-savvy Saverin was reported to have renounced his US passport to escape paying capital gains tax on his wealth, estimated at US$3.4 billion. This would make him among the wealthiest in Singapore, Southeast Asia’s technological and financial hub. Saverin, however denied the allegations of fleeing from taxes. He told the New York Times, “This had nothing to do with taxes. I was born in Brazil, I was an American citizen for about 10 years. I thought of myself as a global citizen.”