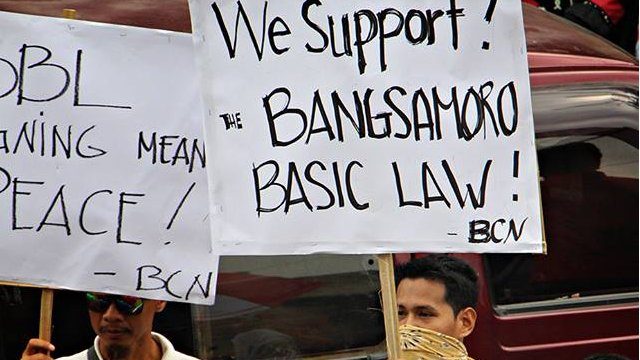 “Yes, all signed except those who were absent,” BTC chairman Mohagher Iqbal told Rappler in a text message at 9:45 pm Sunday.

Two commissioners did not attend the signing ceremony – Fatmawati Salapuddin and Johaira Wahab.

“Neither sent any official explanation of their absence to the historic adoption of the BBL (Bangsamoro Basic Law),” the BTC said in a statement.

The symbolic signing ceremony comes a week after the body submitted a partial draft to President Benigno Aquino III for evaluation and review. The initial draft had yet to contain key details on the police structure for the political entity, automatic block grants, the special development fund, and Bangsamoro waters. (READ: Incomplete Bangsamoro draft law sent to Aquino)

The crafting of the Bangsamoro Basic Law marks the second phase of the peace process in Mindanao – the crucial implementation phase. The first phase culminated with the signing of the Comprehensive Agreement on the Bangsamoro on March 27.

With the draft of the Bangsamoro Basic Law now signed, the BTC is expected to transmit in the coming days their version of the basic law to President Benigno Aquino III for review and evaluation before it is is sent to Congress for deliberations.

Rappler earlier reported that some BTC members nominated by the government were unhappy with how protocols determined by the commission itself were set aside.

One of the issues had to do with transparency on how the BTC decided on the contents of the basic law, a source privy to BTC matters said.

Under BTC’s internal rules, each committee (basic rights, culture, social justice, and indigenous peoples’ matters; transitory provisions, amendments, revisions and miscellaneous matters; political autonomy; fiscal autonomy; justice and security matters) would submit a report to plenary. The body would then decide through votes on whether to accept or deny the proposals.

After the BBL signing, Iqbal reiterated that the document “passed through all levels of deliberations and decision-making,” which he said were transparent and democratic.

When the BTC submitted the partial draft of the Bangsamoro Basic Law to Malacañang, a Rappler source said the document had yet to be signed by all members of the commission.

“If by chance, any commissioner decides not to affix his/her signature to the proposed BBL [Bangsamoro basic law], such is within the purview of his or her right. No one can question that. But one thing sure is that he or she has to explain why he or she did not sign. History will judge his or her decision. But in the immediate, the negative decision will surely make the spoilers happy; they will feast on this even if the decision was based on reasons personally well-thought-out.”

It added: “Better this early, every BTC commissioner must examine his or her conscience whether what side to vote: positively or negatively – and it is the right thing.”

Citing unnamed sources, Mindanews earlier reported that some commissioners were already planning not to sign the draft law and were preparing a minority report.

A day before the scheduled signing, speculation circulated in social media that the Office of the Presidential Adviser on the Peace Process (OPAPP) asked 3 commissioners not to sign the proposed law.

In a statement issued Saturday night, April 19, Ferrer said OPAPP “gave no instruction to any BTC commissioner not to sign the draft.”

She admitted holding meetings with government representatives to the BTC but only for updates and consultations, and shot down speculations about holding any “secret meetings.”

Copy of draft Bangsamoro law won’t be released yet

After being constituted formally as a body in April 2013, the BTC embarked on public consultations across Mindanao. When they sat down for marathon sessions to craft the Basic Law, however, the sessions were largely held behind closed doors.

And the final product of the deliberations – the Bangsamoro Basic Law – won’t be released until the passage of the law in Congress is assured.

“The BTC agreed but the copy will not be given to the commissioners until at a later date when full disclosure of the BBL will not compromise its smooth deliberation in Congress. Besides, an engagement with the government in this regard is required,” it added.

The final document has 97 pages and is composed of 19 articles with 244 sections.

The proposed law would have to go through two rounds of deliberations and approval – first, in Congress; and second, during the plebisicite in Bangsamoro core areas.

This early, lawmakers, including Sen Miriam Defensor Santiago, have raised concerns about the constitutionality of the measure.

Under EO 120, part of the mandate of the BTC is to recommend proposed amendments to the 1987 Philippines Constitution “whenever necessary.” But the government has explained the final peace agreement makes no guarantees that the proposed amendments will be included in the Basic Law.

Amending the Constitution to accommodate the Bangsamoro Basic Law would cost more time for the peace process, making the 2016 target deadline for the creation of the new political entity harder to beat.