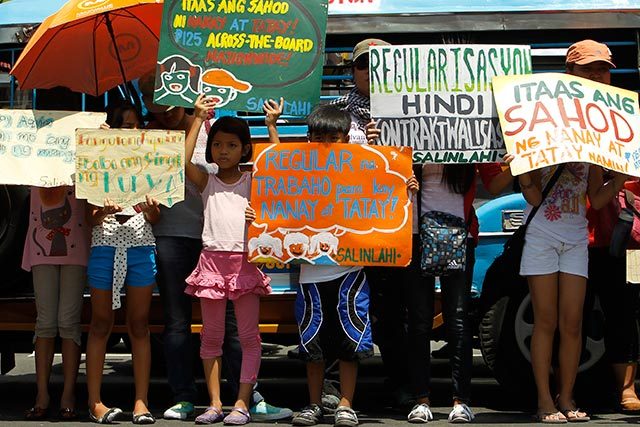 Facebook Twitter Copy URL
Copied
About 30,000 workers will march from España to Mendiola on May 1 to press for tax exemptions and power rates cuts, among others
MANILA, Philippines – Ordinary workers have yet to benefit from the country’s high economic growth because of the government’s refusal to heed their demands, a labor group said on Wednesday, April 30.

On May 1, Labor Day, Nagkaisa – the biggest alliance of labor groups and workers’ organizations in the country – aim to gather 30,000 workers as they march from Welcome Rotonda in Quezon City to Mendiola in Manila to air their demands from government.

The group will assemble along España Boulevard in Manila at 8 am.

Although Nagkaisa recognized Aquino’s efforts to include workers in dialogues, the group slammed the President for failing to address their demands to curb power rates, impose tax breaks and end the system of contractualization.

“President Aquino continues to ignore for 4 years the issues which we believe would help impact the plight of the working people. Workers are feeling deprived of the benefits due them despite of their great contribution to improving the economy,” Nagkaisa said in a statement.

In his pre-Labor Day meeting with labor groups on Tuesday, April 29, Aquino decided to hold an impromptu dialogue instead of delivering his prepared speech.

But labor groups were not satisfied with the Aquino administration’s response.

“Out of the several Cabinet secretaries who responded to the issues that Nagkaisa raised, it was Ms Henares and Mr Petilla who appear to be badly serving the president by refusing to offer solutions to the high cost of electricity and tax issues as a way and means of non-wage economic relief to workers in view of not benefitting from despite of significant contribution to make the economy performed excellently in the past years,” Nagkaisa said.

Petilla has been under fire for allegedly failing to manage power rate hikes amid the looming energy crisis. Henares, meanwhile, has been criticized for the BIR’s  shame campaign targeting professionals and various sectors not paying the correct taxes.

Labor groups had asked Aquino to create a presidential commission on power that would involve parties from various sectors who will craft a 24-month national strategy to address the power situation.

But Nagkaisa said Petilla “downgraded the proposal” by creating a task force under the auspices of the Department of Energy rather than a presidential commission.

During the dialogue, Aquino assured labor groups that the country’s power situation is under still under control. He also revealed government plans to introduce plants that run on natural gas instead of coal.

Aquino, meanwhile, raised concerns over the legality of workers’ demand for tax breaks.

“If we grant tax breaks in one sector, can it be done without violating the Constitution which provides uniform taxation?” Aquino said.

Labor groups want BIR to exempt “de minimis” or fringe benefits from tax, and impose taxes only on the incremental amount of the negotiated minimum wage for regular workers.

Nagkaisa, however, acknowledged the Aquino administration’s move to help the labor sector through various state efforts, including the crafting of a jobs-led agro-industrial plan, monitoring and evaluation of the prosecution of extra-judicial killings of union organizers and journalists, and Nagkaisa’s representation in the formulation and implementation of typhoon Yolanda-hit reconstruction and rehabilitation strategies.

The group also welcomed Aquino’s assurance on the speedy ratification of International Labor Organization Convention 151, which protects the right of workers to organize and sets procedures for determining conditions for employment in the government service.

Asked on Wednesday whether the President will make any announcements on Labor Day that may be viewed as good news by labor groups, Malacañang said Aquino’s dialogue with labor leaders was sufficient.

“I think the President has already met with labor [leaders] yesterday in the dialogue and discussed what are doables, what can be done, what are things that he cannot, for instance—that needs to be further discussed,” he said. –Angela Casauay/Rappler.com