Courts to use e-subpoena to make sure cops attend hearings

Apr 30, 2014 6:50 PM PHT
Bea Cupin
Facebook Twitter Copy URL
Copied
When cops who are called as witnesses in cases don't appear at hearings, courts dismiss thousands of cases, most of them drug-related 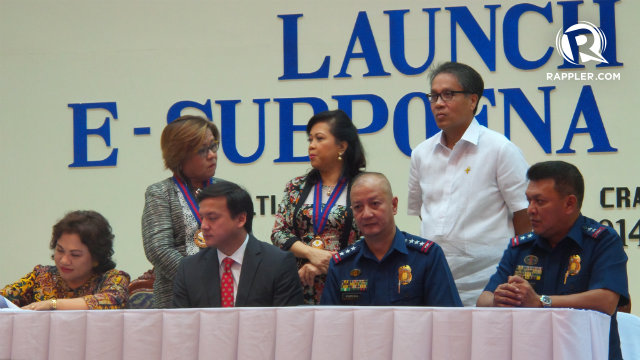 MANILA, Philippines – The justice system of the social media capital of world finally gets an upgrade it badly needs.

The Justice Sector Coordinating Council – composed of the top brass of the Philippine National Police (PNP), the Department of Justice, the Department of the Interior and Local Government (DILG), and the Supreme Court – launched on Wednesday, April 30, the Electronic Subpoena Service and Management Project of the “e-Subpoena System.”

With one click, court administrators can now serve subpoenas to police officers named as witnesses in criminal cases. The new system is being tested in Quezon City before it is eventually rolled out to the rest of the National Capital Region.

Here’s how it works: court administrators enter details of the subpoena in the PNP’s data base using the e-subpoena form. Once it’s sent, the PNP unit’s court process officer (CPO) acknowledges receipt and is in charge of informing the police officer being summoned.

Within 3 days of receiving the subpoena, the CPO and the station’s police chief, through the PNP’s Directorate for Investigation and Detective Management (DIDM), will then inform the court of the availability or non-availability of the police officer being summoned.

Police chiefs ultimately are responsible for making sure police officers show up in court. Non-appearance without a valid reason can lead to the filing of an administrative or criminal case against a police officer.

Speaking at the launch of the e-subpoena at Camp Crame, Chief Justice Lourdes Serreno said suspects were being detained for longer than necessary. Hearings were being postponed repeatedly due to the absence of policemen who were summoned to testify.

(The judges said they didn’t have a choice but to postpone the hearings because there were no witnesses. I asked them: among those witnesses, who usually fail to show up? They said the policemen, especially when it comes to drug cases.)

According to the DIDM, PNP units all over the country received over 100,000 subpoenas in 2013. Of those, 7,000 were not complied – meaning police officers failed to show up during the hearing for one reason or another. As a result of non-compliance, over 1,000 cases were dismissed in 2013. 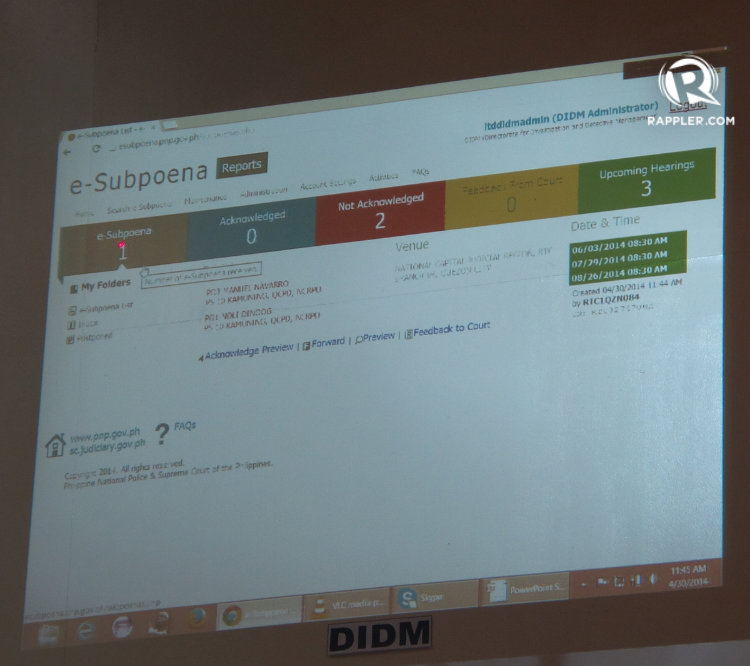 With the e-subpoena, courts are required to serve the subpoenas at least 5 days before the scheduled hearing or within one day from the “order of the court for the service of subpoena duces tecum or subpoena ad testificandum.”

(Even if the judge is hardworking, there are causes of delays that are beyond his control. Each delay is a huge loss to our justice system.)

From ‘just tiis‘ to justice

Sereno called it a “major breakthrough” in the Philippine justice system.

During the launch, Roxas said the new subpoena system marked the change from “just tiis to justice.”

Roxas, who is also chairman of the National Police Commission, said an upgrade in the system of serving subpoenas will also allow police to serve better. In Quezon City alone, police stations receive over 900 subpoenas daily.

(It’s a huge help to the PNP because they can plan ahead – who will appear before the courts, who’s free, so they don’t lose their presence in the streets and the field, and we don’t find the entire PNP spending their time waiting at court rooms for their appearance.)

But the transition from snail mail to email won’t be that easy. For the e-subpoena to work, police stations should have a computer units and reliable Internet connection, aside from user accounts in the database.

(The files aren’t that big, so even if their Internet connection is slow, even if it is only equivalent to cellphone signals, the system can handle it. The files are small so even if the bandwidth isn’t robust, it will still work.)

According to PNP PIO head Chief Superintendent Theodore Sindac, around 10% of the country’s police stations still have connectivity issues. For police stations in far-flung areas, Sindac said the e-subpoenas would be the responsibility of regional offices.

Sindac said testing in Quezon City would run for around a month to iron out kinks. The new system will then be rolled out in the National Capital Region and, eventually, in key cities in the Philippines before the year ends. – Rappler.com