Who is Facebook’s First Lady? 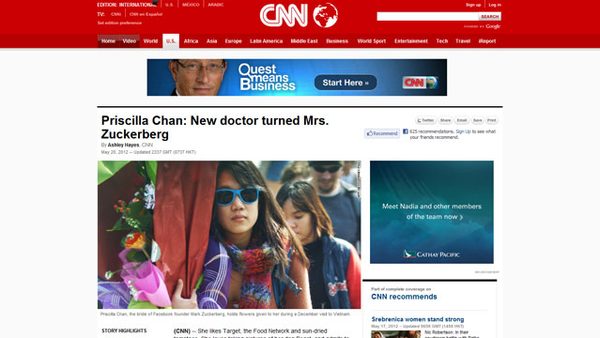 The wedding of Facebook’s founder Mark Zuckerberg to his college sweetheart, Priscilla Chan, put the newly wed wife in a spotlight. Exactly, who is Mrs. Zuckerberg, the ever-so-secret partner of the guy behind one of the world’s most valuable internet firms? Chan just finished her pediatrics studies (their wedding was reportedly held back as the couple waited for her to graduate). Before that, she taught science to 4th and 5th graders in a San Jose, California school after she graduated biology from Harvard where he met Zuckerberg. Her influence on Zuckerberg ranged from vegetarian dishes, Mandarin Chinese classes, and organ-donation initiative on Facebook, which reportedly took off during the couple’s dinner conversations on sick kids she met who were “getting sicker as they don’t have the organ that they need.