May 1, 2014 4:40 PM PHT
Carmela Fonbuena
Facebook Twitter Copy URL
Copied
A US think tank says the Asia pivot is 'not an anti-China message' but 'has to do with growth, innovation, and a paradigm shift in the political patois of the US' 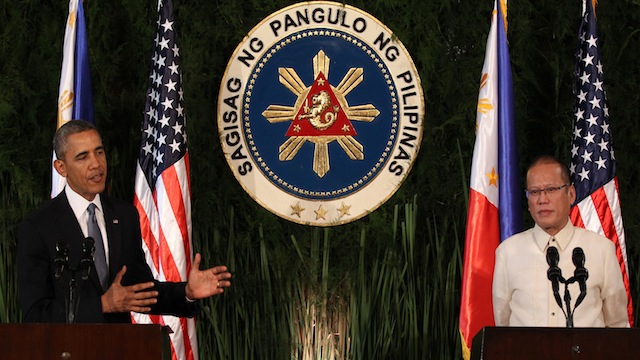 MANILA, Philippines – United States President Barack Obama is sincere about the Asian pivot, but he needs to do more to accomplish it, according to the Southeast Asia studies expert of US-based think tank Center for Strategic and International Studies (CSIS).

“President Obama certainly wants to be the ‘first Pacific President of the United States,'” said Ernest Bower in an e-mail interview with Rappler. He is the CSIS senior adviser and Sumitro Chair for Southeast Asia Studies.

Bower said Obama needs to talk to the Americans and get them onboard, noting that “Asia is where global growth will emanate from in the 21st century.”

The Asian pivot is not necessarily an “Anti-China message,” Bower said, but is actually “relevant to every American’s job.”

“He has to tell them what that geopolitical math is, and why Asia is relevant to every American’s job, savings, well-being, and safety. This is not a scary message or an anti-China message, it has to do with growth, innovation, and ultimately a paradigm shift in the political patois of the United States,” he added.

Born in Hawaii – in the middle of the Pacific Ocean – and having spent years in Indonesia, Obama is the right US president to accomplish the rebalancing strategy, Bower said.

“President Obama certainly has that feel as well as the intellectual capacity to understand the geopolitical calculus that adds up very neatly to the conclusion that the future health, wealth, and security of the United States depends, existentially, on our comprehensive engagement in the Asia Pacific region,” Bower said.

US allies like the Philippines have sought military assistance to counter China, but there are doubts on how far the US will go to help because of threats in Europe and the Middle East that keep luring back US attention.

During his visit, Obama assured US allies. In Japan, he gave a categorical statement declaring that the disputed islands in the East China Sea are covered by their defense agreements. (READ:Obama in Japan says Senkaku Islands covered by security treaty)

In the Philippines, he gave an “ironclad” vow to fulfill US obligation under the Mutual Defense Treaty to defend the Philipines against “external armed attacks.”

The US and the Philippines signed a new military agreement paving the way for increased presence of American troops, allowing them build facilities and preposition defense and disaster response equipment. – Rappler.com