May 2, 2014 11:17 AM PHT
Rappler.com
Facebook Twitter Copy URL
Copied
Speaking before an American think-tank, Binay says the Philippine military agreement with the US is an important pillar of Manila's security policy 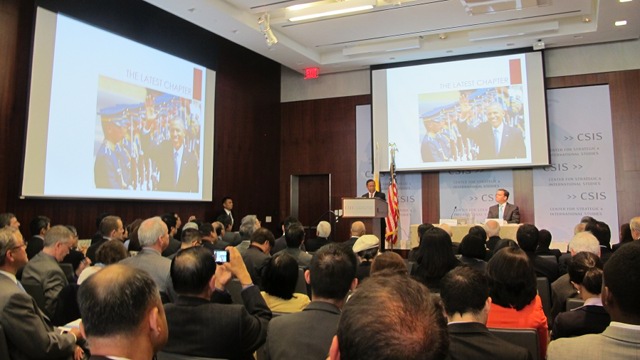 In a speech in Washington DC outlining his economic agenda, Binay said the newly signed agreement is an important pillar of the Philippines’ security policy.

He addressed concerns that the deal will antagonize China, and harm Manila’s trade relationship with Beijing. The deal gives US troops greater access to Philippine bases and allows them to build facilities there.

“A stronger American military presence in the Philippines and greater interoperability between our respective armed forces dramatically increases our individual and collective defense capabilities, providing a dramatic deterrent against external aggression. This, in turn, will soothe and calm the investment climate in the Philippines,” said Binay on Thursday, May 1.

Delivering a keynote address at the Banyan Tree Leadership Forum of the American think-tank Center for Strategic and International Studies (CSIS), Binay said the agreement is also an “important response mechanism to humanitarian and natural disasters.”

“In other words, through the EDCA, we have effectively upgraded our own security platform, without shifting a significant portion of our limited resources to support an arms race and procure weapons systems that exceed our normal defense requirements.  It enables us to focus better on developing a solid economic base to combat poverty, unemployment, illiteracy, and disease,” he said.

Binay said increased tensions between the Philippines and China over the South China Sea (West Philippine Sea) were a “potential downer” for Manila’s economic growth.

“[The] threat of war creates disincentives for long-term investments as well as shifts precious resources to unproductive defense spending,” he said. 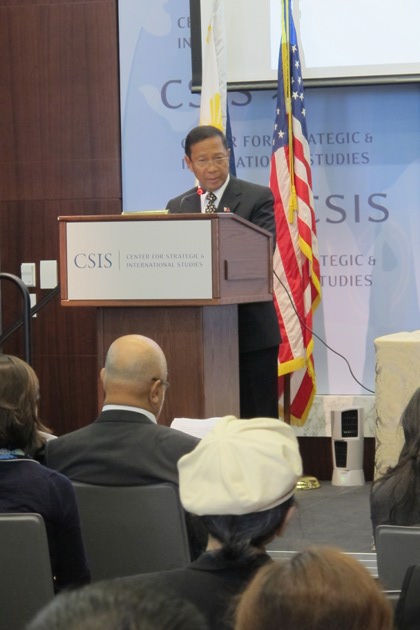 No change in PH strategy

Binay said the agreement does not signal a shift in the Philippines’ “core strategy for regional security.”

“We have always believed and will continue to hold ourselves to the principle that the future of mankind lies not in conflict or war, but in dialogue, cooperation, development and peace.  For our current disagreements in the South China Sea, we will continue to pursue a solution based on international law by going for arbitration as provided for in the United Nations Convention on the Law of the Sea (UNCLOS).”

Binay said as a parallel effort to arbitration, the Philippines supports the conclusion of a binding Code of Conduct on the South China Sea between China and the Association of Southeast Asian Nations, of which the Philippines is a member.

“We also seek to gain understanding of this issue in such regional fora as the ASEAN Regional Forum (ARF) and the East Asian Summit (EAS).  The Philippines and its partners, including the United States, will continue these discussions.”

The Philippines is locked in a territorial dispute with China over parts of the South China Sea. With China’s increasing assertiveness, analysts saw the signing of the EDCA as Manila’s effort to seek a security blanket from the United States, its longtime treaty ally.

Widely seen as the leading frontrunner in the 2016 presidential race, Binay laid out his economic agenda and views on Philippine foreign policy in a speech that foreign correspondents said would “suit the campaign trail.”

Yet as of late, Binay issued stronger statements on the row, saying the Philippines is “no pushover” and will defend its territories “up to the last blood” but resort to peaceful means “as much as possible.”

In his CSIS speech, Binay said the maritime row with China is not the sole component of Manila’s ties with Beijing, echoing the position of President Benigno Aquino III.

“Let me stress, nonetheless, that our support for EDCA does not reflect a freezing of ties with China.  Nor do we view the disputes in the South China Sea as the totality of our bilateral relations with China.”

“Philippine trade with China continues to rise at a dramatic pace.  In 2013, China has become the Philippine’s largest trading partner, a distinction previously held alternately by the United States and Japan.”

Besides trade, Binay said ancestry and Chinese participation in various sectors of  Philippine economy and politics form part of the Philippines’ relations with China.

“In the end, trade, as well as the deep filial ties that bind our peoples, will prevail over the issues of territory and boundaries that are currently threatening our relationship.”