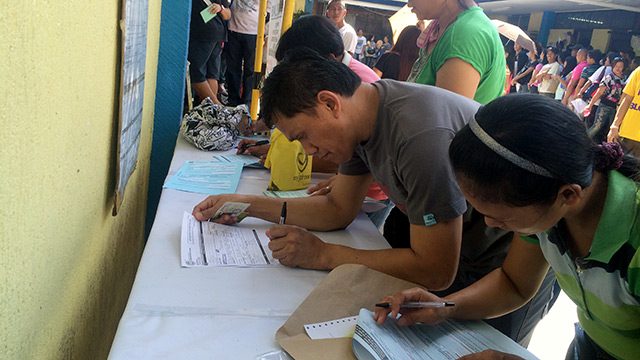 Facebook Twitter Copy URL
Copied
The Comelec says 9.6 million registered voters have to fix their biometrics records or they won't be able to vote in 2016. In addition, it expects 3 million new voters

MANILA, Philippines (UPDATED) – The 17-month voters’ registration kicked off nationwide on Tuesday, May 6, with election officials visiting various centers to encourage registered voters to correct any deficiencies in their records and for new qualified citizens to enlist.

Particularly targetted by the information campaign of the Commission on Elections (Comelec) are 9.6 million registered voters with biometrics issues. They cannot vote in 2016 if they fail to submit their biometrics data.

In addition, the poll body expects 3 million new voters in 2016.

There are currently 54 million registered voters.

On Tuesday, hundreds of voters braved the summer heat and lined up outside election offices in the capital region. 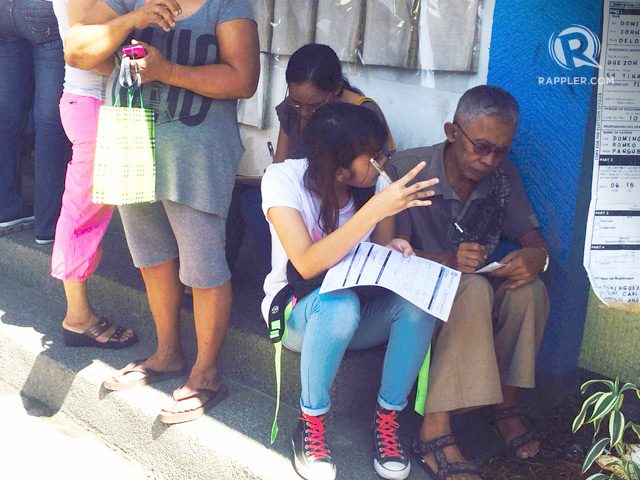 In Quezon City, new and returning voters – with valid IDs and ball pens in hand – turned up even before the offices opened at 8 am.

For some, registering to vote is a family affair. Reynaldo Mamba and his daughter Wella Mae filled out forms together outside the Comelec-QC District 6 office. Reynaldo was transferring his voter records to their new residence in Barangay Sauyo, while Wella Mae is a new voter.

Meanwhile, Grace Talledo was already waiting for her husband to finish registering when Rappler talked to her.

“I just had my biometrics data and my picture taken,” she said.

Voters like Grace who lack or have incomplete biometrics data will also be accommodated throughout the registration period.

In an interview with Rappler, Comelec Commissioner Grace Padaca said that an election officer in Quezon City was surprised with the high turnout during the first day of voter’s registration.

“The election officer attributes the turnout to Comelec’s information campaign. She sees it not as a problem but as a positive development because the consciousness about the registration among voters is high,” Padaca said. To drum up voter’s registration and validation of biometrics data, the poll body also started on Monday its “Walkah Walkah” campaign, where a team of 5 election officials would walk from Laoag City, Ilocos Norte, to Matnog, Sorsogon.

In a phone interview with Rappler, Jimenez said that from Laoag, their team proceeded to walk to San Nicolas and Batac City, where they inadvertedly “crashed” a fiesta.

This week, they will head to Badoc, Ilocos Norte, and Vigan City, Ilocos Sur, he said.

The voter’s registration is open to Filipinos who are at least 18 years old on or before the May 9, 2016, elections.

Comelec offices are open from 8 am to 5 pm every day, even on Sundays. However, the work days vary in each election office.

Senior citizens, pregnant women, and persons with disability will be accommodated in express lanes.

Besides the application of new voters and the validation or capturing of biometrics data, the following services will also be entertained:

Voters first have to present a valid ID bearing their photograph and current address.

After verification by election assistants, voters will be given the appropriate forms to fill out. Then, election personnel will encode the form’s content in voter registration machines (VRM).

Finally, their photograph, digital signature, and digital thumbmark will be taken.

The voter’s registration will last until October 31, 2015. – Rappler.com