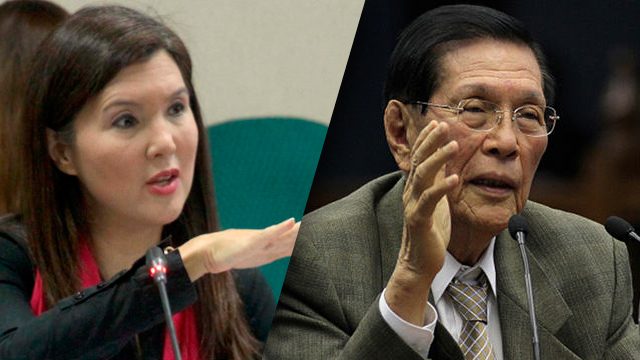 MANILA, Philippines – The sin tax law will need a supporting law like the graphic health warning bill before the country sees a decline in the number of Filipino smokers, the principal author of the bill argued during plenary debates on the proposed measure on Wednesday, May 7.

In his interpellation of the bill authored by Senator Pia Cayetano, Senate Minority Leader Juan Ponce Enrile expressed concern about the effect of what he called the “burdensome requirement” on the tobacco industry, a major revenue source of the government.

“If we succeed in the objective of this bill and we can reduce smoking to about 50% of present level, [do] our finance officials have any idea how to raise an alternative source of tax revenue income for the government to replace what will be lost?” Enrile asked Cayetano on Wednesday.

Cayetano, former chair of the Senate committee on health and demography, said the positive effects of a healthy community far outweigh the negative effects of the bill, if any, on government revenue.

If it weren’t so, other countries would not have adopted the same health measure, she said.

She also noted that the bill wil require “very minor change on the printing requirement” in cigarette packs to be done only at the beginning – just a matter of a “few centavos” for cigarette manufacturers.

“In our last hearing, all tobacco companies agreed this is a measure they’re willing to undertake. I don’t think this is a burden,” Cayetano said.

Cayetano also cited the economic cost of smoking, which the bill seeks to deter especially among the youth, estimated at P177 billion in 2011.

“The economic cost to us in 2011 is already P177 billion. That alone will curb expenses in health because so many of the diseases our people are suffering in rural, urban areas are aggravated by smoking,” she said.

Cayetano said that if there are less smokers in the country, the government would have more funds for health care, social welfare and poverty alleviation programs.

“So many of the recipients of DSWD’s CCT [Conditional Cash Transfer program] are indigent families, many of whom have members who succumbed to diseases caused by; aggravated by smoking. I can say the negative effect on the revenue collection his Honor…can greatly be outweighed by the positive effects of a healthy community,” she said.

The Philippines is one of 168 signatories to the World Health Organization’s Framework Convention on Tobacco Control (FCTC) which requires countries to “implement large, rotating health warnings on all tobacco product packaging and labeling.” Lessons from other countries

Still, Enrile wants empirical data from the Department of Finance on alternative revenue sources in case of a drop in revenues from tobacco products due to the bill.

“I’m not concerned about the experiences of the other countries because I’m responsible for the people of this country and their welfare and I won’t guesswork in adopting a policy that might endanger the entire country, although I accept there is a salutary effect in reducing tobacco use,” he said.

Enrile explained that if the government loses revenues due to the proposed measure, it would have less money for its programs.

Later on, Enrile asked Cayetano about other countries which have “not hurriedly adopted” the graphic health warnings, and why there is a compulsion for the Philippines to adopt it supposedly as early as 2008.

“If other countries did not adopt it, there must be a reason. They must be serving their own interest,” he said.

Enrile told Cayetano to ask the Department of Foreign Affairs to furnish her with a list of compliant and non-compliant countries to the FCTC for evaluation purposes.

Cayetano shot back, asking why such information is necessary.

“We can do that but his Honor said his decision is regardless of what other countries are doing. Why now is he burdening the sponsor with that information if he believes his action is not affected by other countries?”

The two senators have clashed during debates on the Reproductive Health law and the sin tax law.

Enrile asked  Cayetano whether the tobacco lobby is the reason why the country has not yet complied with the use of graphic health warnings in tobacco products. When she said yes, Enrile asked if she had proof that cigarette companies had lobbied in Congress.

Cayetano responded, “I know from personal experience they were talking to many members and trying to delay it,” She also cited a research paper that dubs the Philippine tobacco lobby as the strongest in Asia.

Enrile said the research must be validated first because it is “in effect an allegation against the legislative body of this country.”

Light at the end of the tunnel?

There are indications that things may be different in the 16th Congress for the proposed bill. Unlike in the past, Cayetano noted tobacco companies already expressed their support for the graphic health warning bill.

“Manufacturers have quibbled on the effect of the bill in the last Congress. I welcome their change of heart. For the first time after 3 congresses, manufacturers came to accept this is a measure that is a socially responsible move on their part,” she said. Enrile’s concern, however, is the added cost on consumers, not the manufacturers.

“While manufacturers will not quibble about additional expenses they will incur, the impact of these increase will not be on manufacturers but on consumers on this product which is very difficult to discard even if you know there’s a risk because it becomes a habit and you become addicted,” he added.

But even without these additional costs, there are already calls for even higher tobacco prices. Since prices in the country are still among the lowest in the world, Cayetano said they are not yet high enough to impact the purchasing power of smokers.

And since there is no significant decrease in smoking yet despite the sin tax law, she said higher excise taxes will only result to higher revenues for tobacco companies. – with reports from Ayee Macaraig/Rappler.com