May 8, 2014 4:23 PM PHT
Bea Cupin
Facebook Twitter Copy URL
Copied
Authorities acknowledge that the incident bared the shortcomings of Philippine maritime police but more equipment will be purchased to beef up its patrol

MANILA, Philippines – Philippine maritime police caught not only one but two illegal fishing vessels off the coast of Palawan on Tuesday, May 6, and would have captured even more  if authorities had speedier boats, Philippine National Police (PNP) officials said on Thursday, May 8.

Chief Superintendent Noel Vargas, PNP Maritime Group chief, said the “slow” patrol ships only managed to seize boats that could not flee with other boats conducting illegal fishing activities near Hasa-hasa Shoal, due to mechanical trouble.

“We are not capable of chasing after the boats. Our boat is too slow,” Vargas said in Filipino in a press briefing at the PNP National Headquarters in Camp Crame, Quezon City. 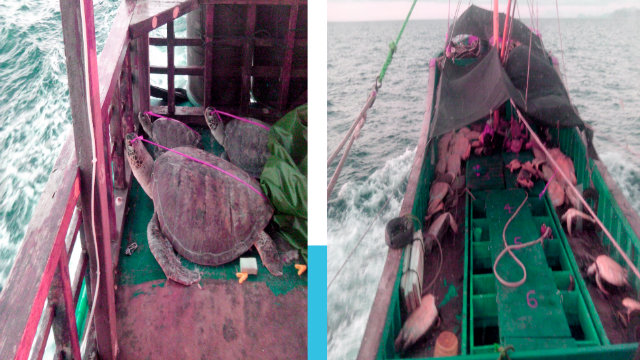 Special Boat Units (SBU) personnel were able to seize only two vessels in Palawan on Tuesday – not knowing one of them was a foreign boat, much less of Chinese origin.

The foreign vessel’s “timon” or steering wheel, as luck would have it, was damaged and prevented its escape, the official said.

The smaller local boat was earlier monitored transferring endangered species – at least 200 live turtles and 250 dead turtles – to the bigger foreign vessel. It too had some problems and could not flee authorities.

All in all, the SBU apprehended 11 foreign nationals and 5 Filipinos. Vargas avoided mentioning the nationality of the 11 foreigners, although he said a Chinese flag was seen on the foreign vessel.

Vargas explained that in the past, the Maritime Group arrested a Chinese boat but found out later that its 6 crew members were of mixed nationalities.

PNP Chief Director General Alan Purisima said the 11 fishermen may face illegal entry charges, in addition  to other possible charges to be determined by the Philippines’ national committee on illegal entrants, a multi-department committee of which the PNP is a member.

The 16 suspects were brought to the SBU headquarters in Puerto Princesa, Palawan at around 4 am on Thursday, May 8.

“The apprehended parties disembarked [in Liminangcong, Palawan]. A bus was rented so they could arrive in Puerto Princessa faster,” Vargas said.

He added that the vessels were being escorted to Puerto Princesa and may arrive in the city by the evening of May 8. The vessels, which Vargas described as “on the verge of sinking,” will be repaired at Liminangcong.

Vargas also denied reports by Chinese media claiming that the PNP fired warning shots in the air before boarding the foreign vessel. “As far as we are concerned, we did not fire shots,” he said.

The incident exposed the shortcomings of the PNP Maritime Group, something Purisima himself acknowledged.

“If the boats did not break down, the Maritime Group would not able to catch them,” he said.

But Purisima said the PNP is already in the process of procuring equipment to patrol the Philippines’ long coastline, in line with the PNP’s modernization program.

In the meantime, he said, “We work with what we have, we patrol the area, we enforce the law.”

Purisima did not give details on the current number of PNP maritime boats or how much more it is planning to acquire, but acknowledged the urgency of getting better equipment.

“We are a maritime country, we need to improve our maritime capability,” he said.

Since January, Vargas said the PNP has apprehended at least 17 foreign poachers – including the 11 arrested on May 6. Vargas said the Maritime Group mostly monitored cases of foreign fishermen along the country’s borders near Malaysia and Indonesia.

On Wednesday, May 7, China demanded the release of the boat and its crew, claiming they were in an area where China had “indisputable sovereignty.”

At his press conference, Purisima emphasized that the site of the incident is Philippine territory.

Malacañang defended the arrest of the illegal fishermen and said the maritime police authorities were only doing their job.

“The action taken by the Philippine National Police is in accordance with its duty to enforce environmental protection and wildlife conservation laws while upholding Philippines’ sovereign rights. So it is in performance of its duty,” said Palace Communications Secretary Herminio Coloma Jr.

Coloma also reiterated the  assurance of the Department of Foreign Affairs (DFA) that “relevant authorities in Palawan will address this case in a just, humane and expeditious manner.”

The arrest of the 11 fishermen, initially reported to be Chinese nationals, comes at a time of rising tension between the Philippines and China over territorial disputes in the West Philippine Sea (South China Sea). – Rappler.com