What happens if ‘pork senators’ are arrested? 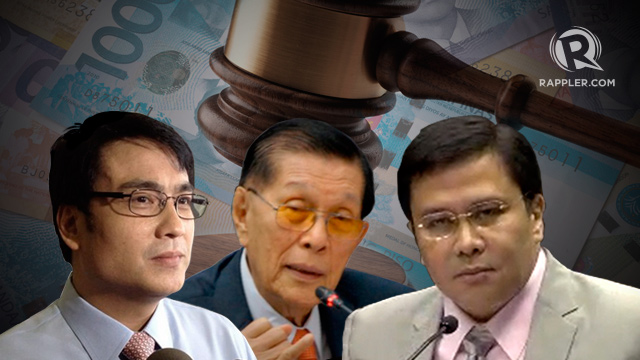 MANILA, Philippines – It’s bound to be a rare and historic moment: the arrest of 3 members of the country’s top lawmaking chamber: a former Senate President and defense minister, and two popular actors-turned-politicians.

Senator Miriam Defensor Santiago said the arrest is only a matter of time after the indictment of Senators Ramon “Bong” Revilla Jr, Jinggoy Estrada and Juan Ponce Enrile for plunder in the country’s biggest corruption scandal. Even Revilla now dares Malacañang to send him behind bars.

Yet with no precedent in the past two decades, how exactly will it play out? What happens to the Senate if 3 of its members are suspended?

Senator Francis Escudero laid out the possible scenario in a press briefing on Thursday, May 8. A lawyer, the senator said here is what will likely happen:

1. The 3 senators can be arrested in the Senate.

The ball is now in the hands of the Ombudsman. It is set to decide whether or not to accept the appeal of the 3 senators on their indictment. On April 1, the anti-graft body found basis to charge them with plunder for allegedly conniving with scam mastermind Janet Lim Napoles to funnel their pork barrel funds to her fake non-governmental organizations, and pocketing millions of pesos in kickbacks.

If the Ombudsman proceeds with filing a case before the Sandiganbayan, Escudero said the court has 2 options: immediately issue an arrest warrant, or grant a request for judicial determination of probable cause that their lawyers might file.

Should the court issue a warrant, Escudero said the 3 senators can be arrested even while the Senate is in session.

Escudero said there need not be a drama of arresting the senators on live television during the actual session.

“It doesn’t have to be that way. They can just stand by the door and wait for the session to end. Things can be done with cooler heads prevailing. ‘Di kailangan magpasikat ang sinuman.” (Nobody needs to grandstand.)

Escudero said it will be a different case though if the senators are arrested in their homes or outside session.

2. The Senate need not and should not vote on the arrest.

Under the plunder law, once a case in filed in court, the senators are automatically suspended from office. Plunder is a non-bailable offense.

Can the Senate intervene by way of a vote?

(The Senate need not vote and suspend them once there is a case. It will be in bad taste for us to vote whether or not to follow a law we ourselves passed. So it is best for the Senate to follow the law. If the vote not to arrest wins, it’s like we are disregarding the law.)

This is the same position that Senate President Franklin Drilon expressed earlier.

3. It’s unique but not the first Senate arrest.

Escudero said that the case of the 3 senators is different from that of Senator Antonio Trillanes IV, who was in detention for the first 3 years of his Senate term over rebellion charges. While in jail, Trillanes held hearings and filed bills.

“Remember, Trillanes’ situation was different. There was no provision that he was suspended from the Senate. He just could not attend session because his case was non-bailable,” Escudero said.

In contrast, Escudero said Revilla, Estrada and Enrile will not be able to exercise the functions of a senator if they are suspended.

While Escudero said this is the first time such an arrest may happen, a similar incident actually occurred in 1990 involving one of the senators now facing charges again: Enrile.

In his first Senate term, Enrile was arrested on the charge of “rebellion with murder” over a coup attempt that nearly toppled the Cory Aquino administration.

A report of the Los Angeles Times states, “Enrile was taken into custody in the Senate president’s office shortly after he delivered an emotional speech on the packed Senate floor. Red-eyed and his voice choked with emotion, he shook hands and said goodbye to most of his colleagues before leaving the building with Alfredo Lim, director of the National Bureau of Investigation.”

This time, if Enrile is again arrested along with his two colleagues, Escudero said it will not hinder the work of the Senate.

“It won’t be affected because quorum is dictated upon by the number of senators at the jurisdiction of the Sergeant-at-Arms. Senators abroad, in jail, will not be part of counting the quorum,” he said.

“What might be affected is ratifying treaties but you can still do that. You need two-thirds of senators to ratify so the vote is always 16. Even if there will be 21 senators left, that can still be mustered even if it’s more difficult,” Escudero added.

He said the Senate leadership can also assign “caretaker chairpersons” to take over the committees of their 3 colleagues.

As for their staff, Escudero said in the case of former Senator Panfilo Lacson who turned fugitive over the Dacer-Corbito murder case, the Senate eventually stopped giving them salary because no one was there to sign their papers.

He said the decision will depend on the rules of the Commission on Audit and the Senate.

“We have to confront that if it comes. This is a unique situation because here, they might be suspended.” – Rappler.com