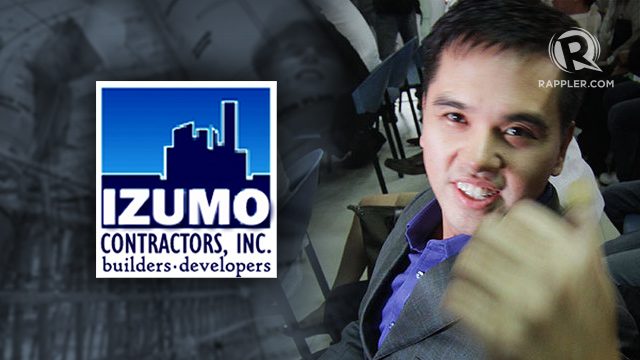 Facebook Twitter Copy URL
Copied
The businessman says he 'heavily relied on the trust and confidence' he gave his accountant employed with the corporation for several years
MANILA, Philippines – Controversial businessman Cedric Lee, among those charged for the mauling of comedian-host Vhong Navarro, denied willfully evading his taxes, and instead blamed his corporate accountant.
Lee filed his counter-affidavit on Thursday, May 8, before the Department of Justice (DOJ) during the preliminary investigation on his P194.5-million (around $4.37 million) tax evasion complaint.
The DOJ probe comes after the Bureau of Internal Revenue (BIR) filed on March 27 criminal complaints against general contractor Izumo Contractors Incorporated (Izumo) and its 3 officers, including Lee, who is president and chief executive officer.
Lee said it was Izumo’s long-time chief accountant Susan M. Nace who “filed the income tax returns (ITRs)” and “prepared the working papers for the financial statements” of the company.
The businessman added that he “heavily relied on the trust and confidence reposed on our accountant who had been employed with the Corporation for several years.”
The BIR is set to file before the DOJ its reply to Lee’s statement on May 23, according to Assistant State Prosecutor Stewart Allan Mariano.
Lee’s estranged wife denies involvement
Included as respondent in the BIR complaint before the DOJ is Judy Gutierrez Lee, Lee’s estranged wife. Gutierrez Lee is Izumo’s chief financial officer (CFO) based on records found by the BIR.
Gutierrez Lee also appeared before the DOJ on Thursday to file her counter-affidavit and denied what she called “trumped-up charges” against her.
She said she has been separated from Lee since 2005. “Since then, I had no dealings with him, his business, or his corporations,” her counter-affidavit read.
Gutierrez Lee even denied being the CFO of Izumo.
“… I have not attended any board meeting and I did not accept any such position as CFO… I had no participation in the management, supervision or control of the day-to-day operations of Izumo,” she said.
BIR investigation
Izumo, Lee and his estranged wife, and Izumo’s chief operating officer John Ong were sued by the BIR for willfull attempt to evade tax and deliberate failure to supply correct and accurate information in its annual income tax returns (ITRs) for taxable years 2006 to 2009.
Having received “confidential information” on Izumo’s undeclared income, the BIR examined the company’s books of accounts and accounting records.
Clients of Izumo include the local government units (LGUs) of Butuan City, Tagudin town in Ilocos Sur, San Juan City, Pasay City, and Davao del Sur province. Request letters were sent to access accounting records of the corresponding LGUs in relation to its transactions with Izumo.
In a statement, the BIR said a comparison of Izumo’s declared gross income in its ITRs with its income as certified by its LGU-clients showed “substantial” disparities.
Showbiz scandal
Lee is currently under government custody, after his April 26 arrest in Eastern Samar over charges of serious illegal detention and grave coercion related to the beating of Navarro.
Lee’s camp claims that the beating was an act of citizen’s arrest, as Navarro allegedly raped model Deniece Cornejo for less than a minute. (READ: Cornejo: Rape can happen in a minute, cites SC ruling)
Cornejo’s rape complaint against Navarro has been dismissed by the DOJ investigating panel for lack of probable cause.
The mauling incident occurred on January 22 at a unit in Forbeswood Heights Condominium in Taguig City, supposedly owned by one Soledad Ramos and leased to Cornejo.
On April 12, a day after the warrant of arrest against Lee, Cornejo, and the 5 other suspects was issued by the Taguig trial court, Lee booked a Cebu Pacific flight bound for Dubai.
He later canceled his booking, said the Bureau of Immigration in a statement. – Rappler.com