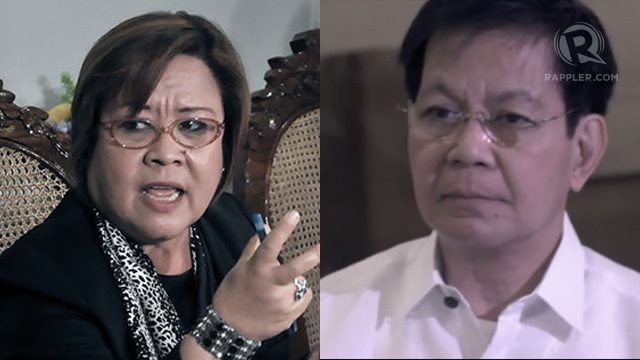 Facebook Twitter Copy URL
Copied
While De Lima says the meeting with Lacson is meant to 'compare notes,' the rehabilitation czar says he will no longer ask De Lima to disclose to him the DOJ version

Lacson expressed willingness to cooperate with the DOJ, after Justice Secretary Leila de Lima declared in a live television interview that she will be scheduling a meeting with Lacson to cross-check the names in their separate versions of the controversial Napoles list.

“I’m actually thinking along the same line. I’m even thinking of turning over to her all the documents and the USB in my possession,” Lacson said in a text message sent Thursday evening, May 8.

While De Lima said the meeting with Lacson is meant for them to “compare notes,” the rehabilitation secretary said he will no longer ask De Lima to disclose to him her version of the list.

He said he will let the DOJ vet the names implicated by Napoles. “The submission will be without conditions,” he added in another text message.

Napoles submitted to DOJ on April 21 a list of the lawmakers she allegedly transacted with and an affidavit to detail what she knows about the scam.

What followed was a media frenzy. The list has been the subject of speculation among lawmakers and political observers.

De Lima, on the other hand, ignored calls to release the list. She kept her silence on the content of Napoles’ affidavit and the names of lawmakers she implicated.

De Lima first expressed her intention to meet with Lacson in a Thursday night interview with GMA News TV’s State of the Nation.

“I want to know if the list of names we have are the same… I will contact him tomorrow, and we’ll see if we can fix a common date and time to meet as soon as possible,” she said in Filipino.

De Lima argued that prematurely disclosing the Napoles list would be reckless. The DOJ will have to finish its vetting process first, she said.

De Lima earlier said the validation process will involve making sure that there is documentary evidence to show the questionable transactions of names implicated by Napoles. She said it is “theoritecally” possible for Napoles to name people who weren’t really involved in the scam.

“I’m sure people would not want me to take her (Napoles’) word for it,” De Lima said, promising not to manipulate the list to exclude crucial names.