Outrage as baby ‘gagged with tape’ at Cebu hospital 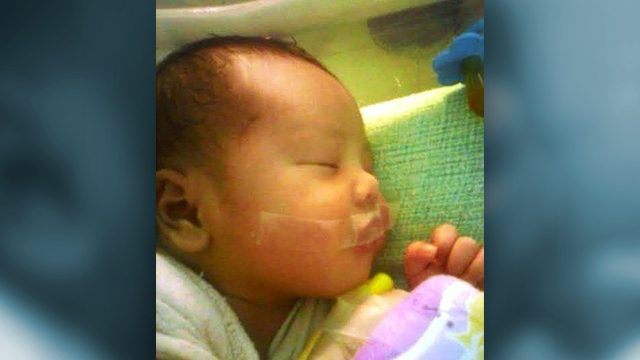 MANILA, Philippines – A Cebu hospital has launched an investigation after photographs of a newborn baby gagged with adhesive tape went viral online, with the father claiming a nurse told him: “Your baby was too noisy.”

Pictures of the baby boy, his eyes shut and his mouth covered with clear tape as he lay on a sheet, sparked a furore as they spread on Facebook, Twitter and other social networking sites.

The Cebu Puericulture Center and Maternity House in the central city of Cebu told Agence France-Presse it was investigating a complaint by Ryan Noval and Jasmine Badocdoc that they had found their 5-day-old son at its nursery with his mouth taped over.

Noval wrote that the couple complained to hospital authorities after they were told by a nurse: “Your baby was too noisy so I put that over his mouth.”

“Meet my son Yohannes Noval,” the father wrote on Facebook. “(He) cannot speak about his horrific experience…so we have to speak out for him.”

The May 9 post showed the now widely-shared photographs of baby Yohannes with a long strip of tape across his mouth and cheeks.

The pictures sparked a storm of comments among social media users.

“Hope that stupid nurse (goes) to jail who put the tape in the mouth of the baby,” wrote a Twitter user calling herself Mellany Monroy.

“They need to look into this so it does not happen again, how horrible! I don’t know how the laws are there but sue, protest!” Facebook user Nicole Vessell wrote on the father’s page.

Mar Tan, a registered nurse and an official of the health department’s health facilities and services bureau, said he was aware of the public outrage but that there has been no complaint filed with the government ministry.

“Crying is a baby’s way of coping. If he’s having problems breathing through the nose and you cover his mouth, he could suffocate,” Tan said. – Rappler.com