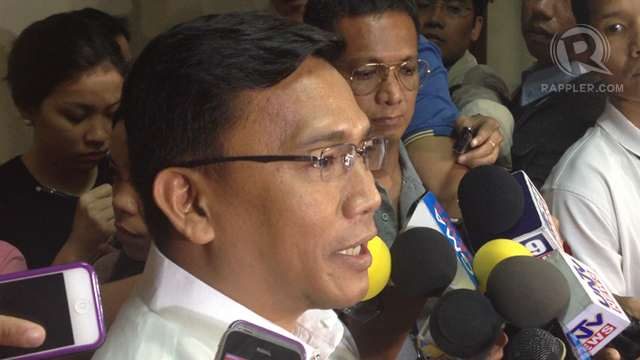 MANILA, Philippines – Why give 5 different lists to 5 different people? Why name lawmakers who cancelled transactions while excluding those part of actual deals?

Lawyer Levito Baligod raised these questions as he said that pleading insanity appears to be the only motive behind the release of various lists attributed to alleged pork barrel scam mastermind Janet Lim Napoles.

The former lawyer of principal whistleblower Benhur Luy was reacting to the list and the unsigned affidavit that Napoles’ family submitted to Rehabilitation Secretary Panfilo Lacson.

The Lacson version of the list of lawmakers Napoles supposedly implicated in the country’s biggest corruption scandal was released after it was turned over to the Senate. Baligod questioned the contents of the files.

“It is full of lies and I will not be surprised if the defense of Mrs Napoles, assuming she was the one who made that document, is to plead insanity. From the list of senators I saw there, I saw that she excluded some but she also included others who are not supposed to be included,” Baligod told Senate reporters on Wednesday, May 14.

Basing his responses on the list of Luy that he was privy to as counsel, Baligod said the Lacson version of the Napoles list included senators who cancelled transactions, and returned money.

“There was one senator included [in the Lacson version] whom she gave P500,000 to and I have a witness who has yet to surface who personally accompanied Mrs Napoles when she handed over the P500,000 in a restaurant in Greenhills. The agreement was to allocate the PDAF (pork barrel) of that senator but the deal did not push through so you cannot say there was a transaction but she still included the senator in the list,” Baligod said.

Baligod said Napoles gave P630,000 to another senator but the lawmaker also did not make good on the agreement and returned the money.

“So will you include those people in the list?”

Baligod said Luy’s records showed the return of the money from at least one senator.

‘What about Montblanc pen?’

Yet while the Lacson version of the Napoles list included senators who backed out of transactions, Baligod questioned why it did not name others she dealt with.

(If she included names of lawmakers who accepted money even without giving her PDAF, why didn’t she also include the one she gave a Montblanc ballpen to worth about P150,000? Those are both illegal, the other is a violation of PD where government officials are prohibited from accepting gifts.)

Baligod was referring to Presidential Decree 46, which bars public officials and employees from receiving gifts and requires them to be “above suspicion and reproach.”

Asked if he was referring to Senate President Franklin Drilon, Baligod said, “I will not confirm that but that it is how careful we are, even with the list of Benhur Luy.”

Baligod said when he was Luy’s lawyer, he saw that many lawmakers were included in his client’s record but he and the justice department could not simply name and file cases against all of them without supporting documents or witnesses.

“There is an example where Mrs Napoles would tell Benhur, ‘Benhur, record that I gave this lawmaker this amount.’ Those instances, we did not include in the case because there was no other supporting evidence. When there is personal knowledge of the whistleblowers, for example they prepared the money or handed over the money, that is what we include in the evidence,” Baligod said.

‘But on the mere say-so of Mrs Napoles that ‘Benhur, I gave money to this mayor’ but no whistleblower saw it, we did not charge them.”

Baligod said he already submitted Luy’s digital files to the justice department back in May 2013, along with a 2,700-page printout that Luy certified and the National Bureau of Investigation subjected to forensic investigation. He said the Ombudsman also has a copy of Luy’s files.

“In so far as the whistleblowers are concerned, there is nothing you can remove or add to the list of Benhur Luy,” said Baligod, also the counsel for other whistleblowers.

‘I didn’t talk to mayors’

Baligod also denied the assertion Napoles supposedly made in her unsigned affidavit submitted to Lacson that he convinced 97 mayors implicated in the Malampaya fund scam to support De Lima’s senatorial bid in exchange for their removal from the charge sheet.

“I did not see even the shadow of 97 mayors and she should name even one mayor I talked to so we can find out if she is telling the truth. What she does not know is that the Office of the Ombudsman conducted field investigation, and its lawyers went to the 97 municipalities and confirmed that their signatures were fake so why charge them?”

The claim was among those included in the unsigned affidavit, which lawyers and senators dismissed as having no evidentiary value.

The P900 million Malampaya fund scam involves the plunder of government earnings from the natural gas project off Palawan. The funds were intended for farmers who were typhoon victims but were siphoned off to Napoles’ bogus NGOs. – Rappler.com